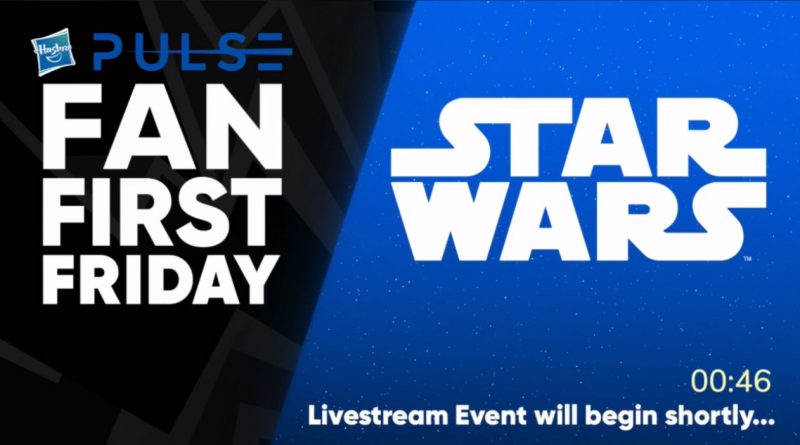 Patrick and Emily from Hasbro held today’s Fan First Friday, Star Wars edition. The livestream kicked off with a video of the new Galaxy’s Edge Millennium Falcon which is available from Target. There were only a couple new announcements in The Vintage Collection and Black Series with most time spent on the new Celebrate the Saga releases. Photos and info below broken out by theme.

Will consist of 8 multi-packs which include a mix of previously released 5 points of articulation (PoA) figures along with some new droids which either haven’t been done before, OOM-10 and TC-4, or haven’t been done in the realistic style such as R7-A7. The sets will be available for a limited time and in limited quantities and once they’ve move out of retail  they’ll be put in the “vault.” All of the figures use the updated face printing technology.

The Galaxy of Adventures figures will continue as will the Retro collection which Emily commented, “watch out for more of it.” However, this is the last time we’ll see the 3.75″ kid focused figures for the foreseeable future.

The Gaming Greats line will continue at GameStop. The line look will continue with the current boxes and not switch for to the updated packaging that we’ll be seeing at retail. They mentioned recently announced, and released, figures such as Jango Fett, Jedi Knight Revan, Heavy Battle Droid, Stormtrooper Commander, and Shadow Stormtrooper.

Today’s announcement include Jedi Fallen Order Electro Staff Purge Trooper. This is the Specialist variation and includes a staff with removable light effects.

There was mention of the previous figures announced this year including Ahsoka Tano, Mandalorian Loyalist, and Mandalorian Super Commando. The new announcement is for a Phase I Lieutenant Clone Trooper which will be a Walgreens exclusive. The figure will be on sale September 15, 2020.

There will be a new Force FX Elite Emperor Palpatine lightsaber. The lightsaber is made of metal and chromed, has a removable blade, progressive ignition, glow “cutting” effect, force lighting effect, and sounds. The set also includes a stand for display.

Most of the items will be available for pre-order today either from the retailers mentioned above or, for general release, Hasbro Pulse and other stores probably to include BigBadToyStore and Entertainment Earth.

There was no announcement of the HasLab project other than to confirm that it is going to be announced in September. Unlike the Marvel team, there was no teaser.

An announcement of an European Union (EU) exclusive will be announced next week. That should be available in the US later.