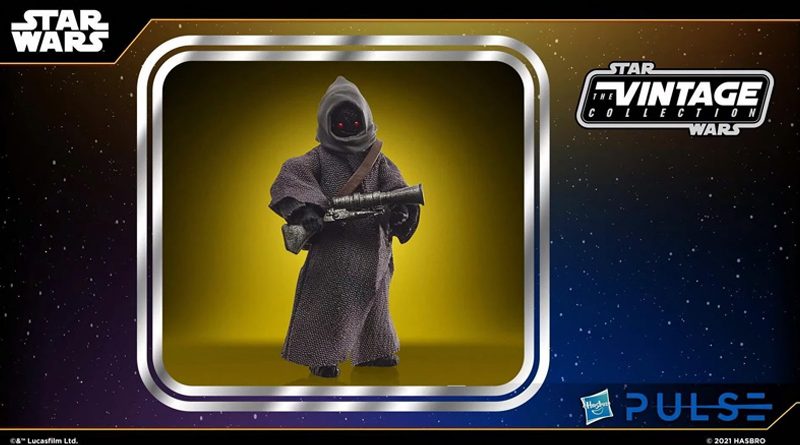 Hasbro has wrapped up their May the 4th livestream, hosted by Jing, Emily, and Eric. They had several new announcements for both the Vintage Collection and Black Series plus a surprise Retro Collection reveal.

The first piece of info announced is that during the last Hasbro livestream where Luke Skywalker (Hoth) was announced, it was noticed that the photos of the figure didn’t include the removeable collar that the original had included. Jing confirmed that the collar will be included in the figure and showed off an updated photo of the figure.

Two new releases will be in the main Vintage Collection line; ARC Trooper Echo (from 2020 3-pack) and Offworld Jawa from The Mandalorian. Pre-orders will be available May 5th at 1:00PM EST from most retailers including Hasbro Pulse.

Not available for pre-order tomorrow, but coming later in the year, is a new Ewok, Teebo. No packaging photo was shown so we’ll be looking for that in the future.

As part of the complete The Ninety Six Vintage Collection program, three new figures were announced as Walmart exclusives. They’ll all be available for pre-0rder tomorrow, May 5th, at 1:00PM EST on Walmart.com

The Tusken Raider has an updated head sculpt and elbows. As will all new releases, the figures will have the Photoreal face print.

Wrapping up The Vintage Collection announcements was the Vote From the Vault winner announcement, the Republic Trooper. The figure will feature an updated face print using the new Photoreal technology. The packaging shown in the teaser image is not final and will feature some updates. The figure will be released in the Spring of 2022 and pre-orders will come later this year.

Two new GameStop Exclusive Gaming Greats, both from Star Wars Jedi: Fallen Order, kicked off the Black Series announcements. They will be available for pre-order at 1:00PM EST on May 5th on GameStop.com.

Star Wars The Bad Batch launched on Disney+ today and the final reveals today are from the new show. The first won’t be available for pre-order until later this year so they only had a Pipeline reveal for Omega. She’ll be released in Spring 2022.

Exclusive to Walmart in the US, the final two Black Series reveals from The Bad Batch are Imperial Clone Shocktrooper and Vice Admiral Rampart. They will be available for pre-order on May 5th at 1:00PM EST on Walmart.com.

Finally, a new Role Play reveal came in the form of a Death Watch Mandalorian helmet. It features a moveable range finder with LEDs and illuminated heads-up display. Pre-orders will be available May 5th exclusively at GameStop in the US.