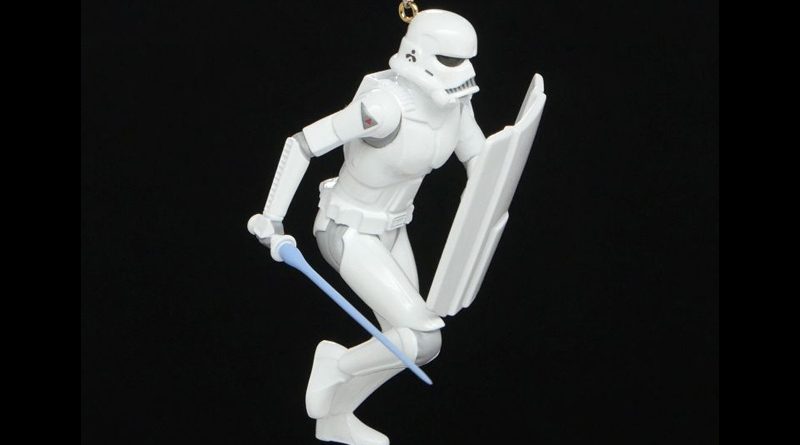 Limited to 2,600 pieces, the exclusive Keepsake ornament is a Stormtrooper based on Ralph McQuarrie’s concept artwork for Star Wars: A New Hope.  The ornament is limited to 650 per day

Last year at New York, Hallmark announced an Ahsoka Tano itty bitty figure that will be an online exclusive coming later in the Spring. A limited number will be available at Celebration during a signing with Ashley Eckstein.

Each item will be sold in limited quantities at each day of the event, scheduled April 13-16 at Orange County Convention Center in Orlando, Fla.

PopMinded, which debuted nationally last year, is Hallmark’s new way to celebrate fandom with gifts and collectibles created and chosen with all fans in mind. PopMinded continues and expands on Hallmark’s decade-long tradition of providing event attendees access to Hallmark’s ever popular event exclusive products through its event pop-up store.

Beginnings: Stormtrooper™ keepsake ornament features the shield-carrying, lightsaber-wielding armored soldier inspired by the styling of famed artist Ralph McQuarrie in preproduction art for Star Wars: A New Hope. In the 40 years since their creation, McQuarrie’s original visions for the Star Wars galaxy of characters, vehicles and planets continues to inspire and delight fans. Beginnings: Stormtrooper has a total production run of 2,600 and sales will be limited to 650 per day.

This is Hallmark’s 21st year of producing Keepsake Ornaments that capture favorite memories of the Star Wars saga, including event-exclusive ornaments that first were produced in 2008.

Snaggletooth™ and Hammerhead™ bring the Mos Eisley Cantina to Hallmark’s itty bittys® line. Hammerhead and a red-suited version of Snaggletooth itty bittys® are designed and packaged with a nod to the original Star Wars action figures. Each itty bitty, packaged in a blister card, has a total production run of 3,000 and sales will be limited to 750 per day. In addition, a blue-suited Snaggletooth will be available “loose”, not carded and has a total production run of 1,000 with sales limited to 250 per day.

Dozens of heroes, villains and creatures of Star Wars now figure among the iconic characters of film, comics and television to appear as uniquely styled plush itty bittys® exclusively in Hallmark Gold Crown® stores and online at Hallmark.com.

In addition to the event exclusive product, fans can also purchase a commemorative poster and button set, designed by a Hallmark artist and in very limited quantities. There will also be a limited number of Hallmark Gold Crown store products made available for purchase at the onsite PopMinded pop-up store. One of those items is a Star Wars Rebels Ahsoka Tano™ ittty bitty that is only available on Hallmark.com, will be offered during a signing with the voice of Ahsoka, Ashley Eckstein.

PopMinded will continue the tradition of exclusive buttons, handed out in limited quantities with a different design released each day of the convention. Other activities in the booth will include signings, meet & greets, interactive art display, and a Star Wars themed photo booth where fans can take home a memorable picture as well as instantly post to all their social media channels.

For more information about PopMinded by Hallmark and the products offered, visit Hallmark.com/PopMinded