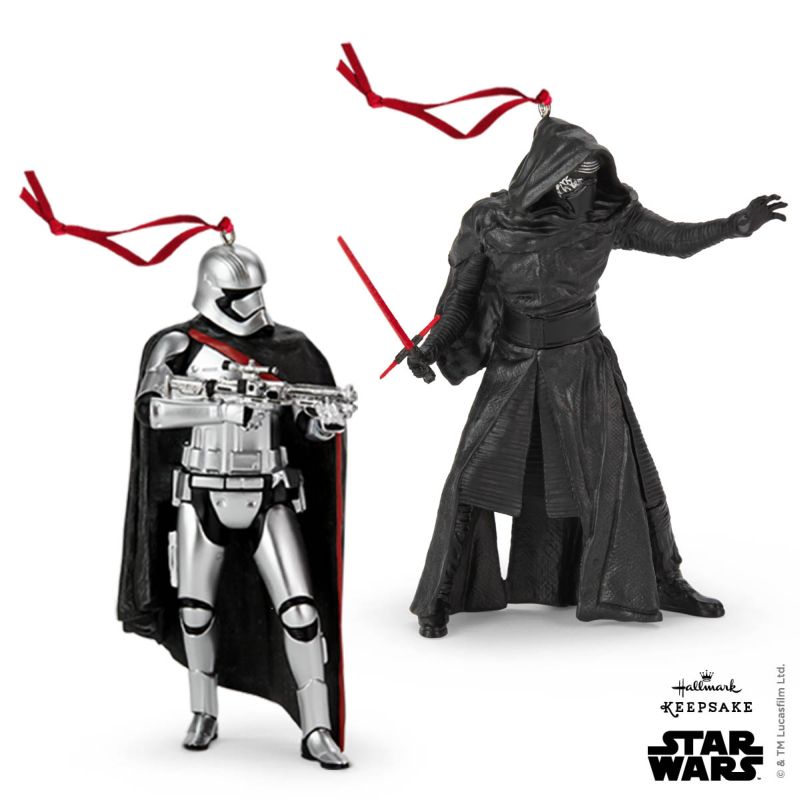 We’re still playing catch-up on all of the Force Friday news and next up on our list is Hallmark.  They will have two new Keepsake Ornaments, Kylo Ren and Captain Phasma. Fans of the itty bittys line of plush characters will have the opportunity to pick up Rey and Kylo Ren.

Also on the way, new Cubeez, greeting cards, mugs, coasters, and additional holiday decorations. Look for the Kylo Ren ornament on Ornament Debut weekend with the other items following through the end of the year.  Find the full Hallmark press release and store links below.

“It’s an exciting time with Star Wars fans preparing to see their new and classic characters back on the big screen,” says Christine Taylor of Hallmark Licensing. “We’ve created a great line-up of products to extend and complement the movie-going experience for longtime fans as well as new ones, and we can’t wait to share them.”

Cubeez, Hallmark’s character-based metal boxes to fill, stack and collect, will appear in Hallmark Gold Crown® stores as a four-piece collector set bearing likenesses of round Droid BB-8, as well as the characters Rey, Kylo Ren and Captain Phasma. Other new gift items inspired by the movie include mugs and drink coasters.

Greeting cards for all occasions will feature characters and spacecraft from Star Wars: The Force Awakens, and will be available for sending this fall.

The largest selection of Hallmark Star Wars products will be found in Hallmark Gold Crown stores and online at Hallmark.com; use the store locator to find a nearby store.

Hallmark makes the world a more caring place by helping people express what’s in their hearts and connect in emotional ways with others. In the U.S., innovative Hallmark greeting cards and gifts are sold through the network of Hallmark Gold Crown® specialty stores, leading mass retailers and online. Worldwide, Hallmark offers products in more than 30 languages available in 100 countries. Millions of households enjoy family friendly television programming offered by cable’s top-rated Hallmark Channel and fast-growing Hallmark Movies & Mysteries. Hallmark’s Crayola subsidiary inspires artistic creativity in children through Crayola® crayons and markers as well as other innovative art tools, crafting activities and creative toys. Privately held Hallmark is based in Kansas City, Mo., and continues to be led by members of the founding Hall family. Visit http://corporate.hallmark.com for more details. Connect at Hallmark.comand on Facebook, Twitter, Instagram and Pinterest.