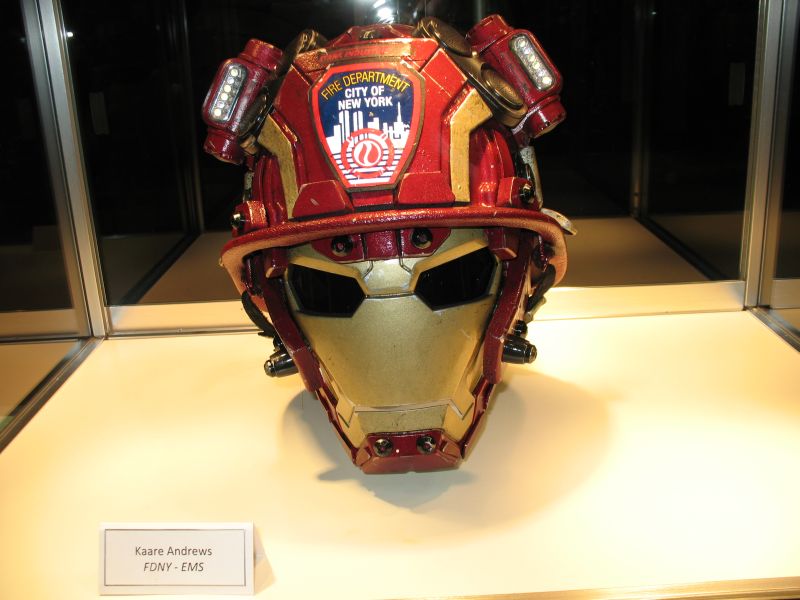 The FDNY and Marvel teamed up at NYCC to auction off several custom fire helmets to benefit the FDNY Foundation. Artists such as Walt Simonson, Phil Jimenez, Joe Quesada, and the cast of Daredevil created one-of-a-kind works of art using fire helmets.  The first set of helmets was auctioned during Comic Con on Saturday, October 10th.

The remaining helmets are currently on eBay on the Reed Pop account and bids are being taken until Monday, October 26th.  All proceeds from the sale go to the FDNY Foundation which is the official non-profit organization for the New York City Fire Department.

The helmets can be found on eBay in the Reed Pop store along with several autographs.  The full press release for the auction can be found after the jump.

One-Of-A-Kind Helmets Featuring Spider-Man, The Hulk, Captain America, and More from Joe Quesada, Damion Scott, and Other Top Artists to be Auctioned for FDNY Foundation During New York Comic Con

NORWALK, CT – October 6, 2015 – The FDNY – long celebrated as New York City’s bravest – will be supported by some of the world’s greatest superheroes in honor of the Department’s 150th anniversary and New York Comic Con with an exclusive line of superhero inspired FDNY helmet designs. Featuring Spider-Man, The Hulk, Captain America, Black Widow and others, the helmets have been created for a charity auction that will raise money for the FDNY Foundation. The helmets were designed by the industry’s leading comic book artists including Marvel’s Chief Creative Officer, Joe Quesada, along with Damion Scott, Kaare Andrews, Walt Simonson and others who used their skills to render awe-inspiring illustrations of these recognizable heroes. They will be revealed during a “This Week in Marvel” podcast at Discovery Times Square on Tuesday, October 6 as part of an exclusive New York Super Week event. Following the event, they will go on display in Artist Alley at the Javits Center during New York Comic Con October 8-11.

The helmets draw inspiration from some of Marvel’s greatest heroes. Quesada, a longtime FDNY supporter and the creative force behind “Heroes” a historic tribute book featuring Marvel superheroes in the wake of the 9/11 tragedy, created a Captain America inspired helmet featuring his iconic shield. Damion Scott introduces the world famous web-slinger – Spider-Man – into a vibrant helmet design full of the character’s iconic blue and red. Other artists contributing to the program include Phil Jimenez, Phil Noto, and Joe Rivera.

The majority of the helmets will be auctioned off at charity event on Saturday, October 10 at the Javits Center at 6:30 PM in Room 1A18. Those helmets not auctioned off at the event will be available for auction at the ReedPOP Supply Co eBay account from October 19-23. All money raised will go to benefit the FDNY Foundation, the official non-profit organization of the New York City Fire Department.

“Helmets are essential tools for the brave work our Firefighters, Paramedics and EMTs have performed for 150 years.  They are not only used for the safety of our members, they are also enduring symbols of the FDNY,” said Fire Commissioner Daniel A. Nigro.  “Now, thanks to our partners at Marvel and New York Comic Con, these helmets have been reimagined with artwork of iconic superheroes, raising funds for the FDNY Foundation to help the Department protect all New Yorkers.”

“The FDNY Foundation is grateful and excited to be working with our friends at Comic Con and Marvel as the FDNY marks its 150th anniversary,” said FDNY Foundation Executive Director Jean O’Shea. “Comic Con and Marvel are helping us to bring awareness to fire and life safety education and the funds raised by these helmets will help support the critical, life-saving mission of the FDNY.”

“We are thrilled to have formed this dynamic partnership between fictional and real-life superheroes,” said Christina Rowley, Director of Licensing at NYC & Company. “Through this meaningful collaboration, Comic Con is making New York’s Bravest part of one of the most talked-about pop culture events in the world on the 150th anniversary of the department’s heroism.”

“We are very used to celebrating heroes at New York Comic Con, but they’re the fictional kind,” said Lance Fensterman, Global Senior Vice President of ReedPOP, producers of New York Comic Con and New York Super Week. “The fact is, the city’s bravest do reside in New York City – and they aren’t fictional superheroes – they are the real deal and they’re the FDNY.”

New York Comic Con, the crown jewel of New York Super Week, will take place October 8-11 at the Javits Center in New York City. The Show is the East Coast’s biggest and most exciting popular culture convention with the latest and greatest in comics, graphic novels, anime, manga, video games, toys, movies and television. The Show’s Panels and autograph sessions give Fans a chance to interact with their favorite creators and guests, while screening rooms feature sneak peeks at films and television Shows months before they hit either big or small screens.

The FDNY Foundation is the official non-profit organization of the New York City Fire Department, allowing the FDNY to use donations from concerned businesses, foundations and individuals to promote awareness and outreach to the public, training and support of members of the FDNY and enhanced technology and equipment to better protect all who live, work and visit New York City every year.