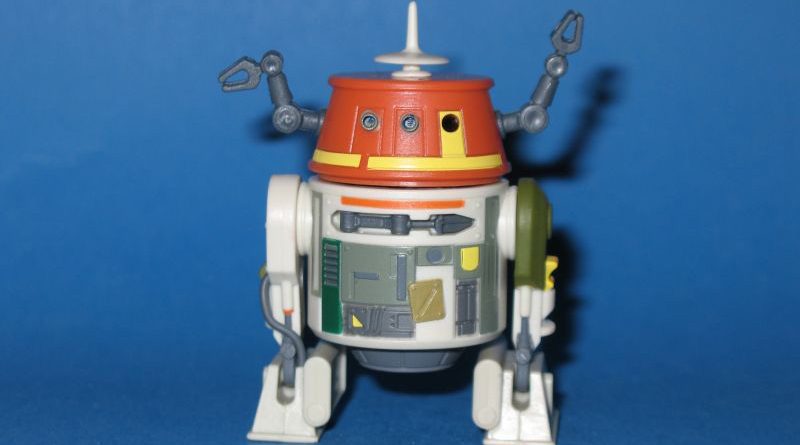 Disney’s Droid Factory has been a popular attraction in the parks, allowing fans to build custom droids with multiple colors and domes. Now, Disney is expanding that attraction by adding Protocol droids which were added this past weekend to coincide with Star Wars Celebration. For those not attending the parks, Disney had a booth full of new collectibles on the show floor of the Orange County Convention Center.

Along with pins, lightsabers, and other collectibles, Disney had three carded Droid Factory figures including a new C1-10P “Chopper” figure from Star Wars Rebels, R-3D0, and an R2-D2 and C-3PO 2-pack.  We picked up Chopper and R-3D0 and here’s a first look at Chopper.

The figure is larger than the Hasbro release and includes much more detail. It is a build-a-figure design and you can remove the dome, legs, and antenna. He’s compatible with Hasbro build-a-droid parts so you can really play around mixing and matching parts.

In the package, Chopper comes with his middle wheel leg and his mismatched left leg attached. He also comes with a matching left leg and a thruster than can be swapped out for the middle leg. Both of the arms on his dome are articulated with two joints and a swivel where they attach to the dome. The torso arm also extends from the body. All three legs have wheels in the bottom that roll as does the wheel on his middle leg. The antenna is removable but doesn’t have any articulation to angle it. The matched legs also include a nice detail in that the wire is a separate part from the leg, something that the build-a-droid parts in the parks have done away with. Paint apps on the figure are well done, including on the back which the Hasbro figure lacks.

Chopper was available during Celebration for $12.99 carded and has since shown up as available on the Disney Parks App.