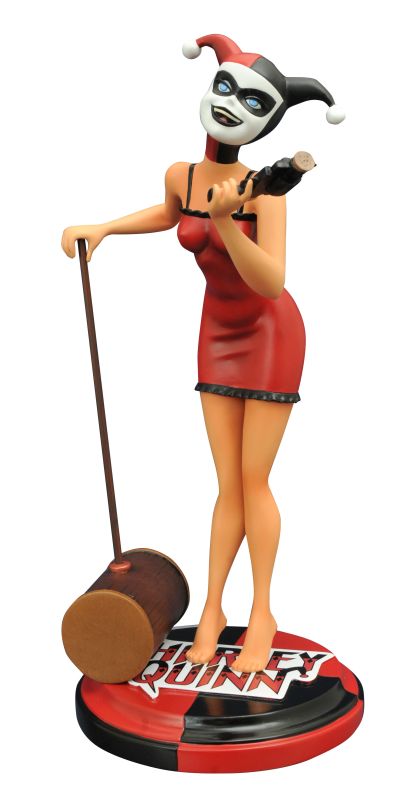 If you’re headed to your local comic shop today, be on the lookout for a bunch of new DC Superhero collectibles, and a new action figure of Liv from “iZombie.”  Check out the photos and press release below.

On Sale This Week: Batman, iZombie and Supergirl!

It’s a DC kind of week at Diamond Select Toys HQ, as comic shops are receiving eight new collectibles from the world of DC Comics-based television! Batman: The Animated Series, the Batman Classic TV Series, iZombie and Superman: The Animated Series all get new products this week, including busts, statues, action figures and banks! Read on for more info, then find your nearest comic shop and see what they have on hand! If they don’t have it, ask them if they can order it!

Catwoman just got busted! The master thief, who has been perpetrator, partner and paramour to Batman, is now the newest resin bust in DST’s line of busts based on Batman: The Animated Series. With her feline companion perched on her shoulder, this approximately 6-inch bust of Selina Kyle features detailed paint applications and a purr-fectly formed sculpt atop an art-deco base. The bust comes packaged in a full-color box with a certificate of authenticity. Limited to 3,000 pieces. Sculpted by Varner Studios! (Item #SEP152161, SRP: $59.99)
http://www.diamondselecttoys.com/batman-the-animated-series-catwoman-resin-bust

This cat has nine lives! Robbing the rich and running around on rooftops gets Selina Kyle’s engine racing, and now DST has captured her in the act with this 9-inch scale PVC statue! Standing atop a rooftop base with her feline friend, this PVC statue of Catwoman as she appeared in Batman: The Animated Series comes packaged in a full-color window box, and will fit in with the rest of your DC Animated Femme Fatales statues. Sculpted by Varner Studios! (Item #SEP152162, SRP: $44.99)
http://www.diamondselecttoys.com/batman-the-animated-series-femme-fatales-catwoman-pvc-statue

Time for some Harley Quinn romance! The psychologist once known as Harleen Quinzel may have the hots for The Joker, but the Clown Prince of Crime doesn’t always realize what he’s got! This 12” resin statue of Harley Quinn is based on her look in the timeless New Batman Adventures episode “Mad Love,” and depicts a dolled-up Harley wielding her mallet and pistol. Packaged with a certificate of authenticity in a full-color box, this statue is limited to 3,000 pieces and is a must-have item for any fan of Batman, Harley or the Joker himself. Sculpted by Clayburn Moore! (Item #AUG152310, SRP $150.00)
http://www.diamondselecttoys.com/batman-animated-premier-collection-mad-love-harley-quinn-statue

The Batgirl of your dreams is now the centerpiece of your statue collection! The first full-size statue in our Batman Classic TV Series line, the Premier Collection edition of Batgirl depicts actress Yvonne Craig as the unforgettable sidekick to Batman and Robin, the way she appeared in the third season of the classic TV show. Sculpted by the legendary Clayburn Moore in her distinctive purple-and-yellow crimefighting costume, this resin statue of TV’s Barbara Gordon stands approximately 12 inches tall atop a Bat-logo base. Packaged in a full-color box with a certificate of authenticity. Limited to only 1,966 pieces! (Item #APR152297, SRP: $199.99)
http://www.diamondselecttoys.com/batman-classic-tv-series-premier-collection-batgirl-resin-statue

We’ll say this for Batman, the caped crusader sure knows how to party! Based on the very first episode of the Batman Classic TV Series, this resin bust features Batman doing his “Batusi” dance moves, which soon became a pop-culture touchstone. Measuring approximately 6 inches tall and featuring the likeness of actor Adam West, this bust comes packaged with a certificate of authenticity in a full-color box. Limited to 3,000 pieces. Designed by Barry Bradfield! Sculpted by Jean St. Jean! (Item #AUG152312, SRP: $59.99)
http://www.diamondselecttoys.com/batman-classic-tv-series-batusi-batman-resin-bust

Everyone knows that the Batmobile has a lot under the hood, but now it’s got something else under there: your change! This vinyl version of the Batmobile from the Batman Classic TV Series measures 9 inches long, and has a coin slot between the seats and an access door in the base, meaning this high-quality vinyl replica is also a bank, for storing your non-giant pennies and scarred silver dollars. Park it in your home Batcave! Packaged in a clear polybag. (Item #JUL152195, SRP: $22.99)
http://www.diamondselecttoys.com/batman-classic-tv-series-batmobile-vinyl-bust-bank

The iZombie action figure just got a power-up! This Previews-exclusive variant on DST’s action figure of Liv Moore from iZombie features Liv in full-on zombie mode, with red eyes, veiny skin and a mad-on for some brains. Based on the hit CW TV show, this 7-inch scale figure includes interchangeable hands and accessories, and comes packaged on a full-color blister card. Only available at comic shops and specialty stores! Sculpted by Gentle Giant! (Item #DEC152114, SRP: $19.99)
http://diamondselecttoys.com/izombie-tv-full-on-zombie-mode-liv-moore-action-figure

Criminals of Metropolis beware! While she may not truly be Superman’s cousin, Kara In-Ze hails from the same region of space, making her strong, fast and tough under Earth’s yellow sun. So think twice before committing a crime within the city limits! This approximately 6-inch resin bust depicts Supergirl as she appeared on Superman: The Animated Series, striking a confident pose atop an architectural base. The bust comes with a certificate of authenticity in a full-color box, and is limited to 3,000 pieces. Sculpted by Varner Studios! (Item #AUG152309, SRP: $59.99)
http://www.diamondselecttoys.com/superman-the-animated-series-supergirl-resin-bust