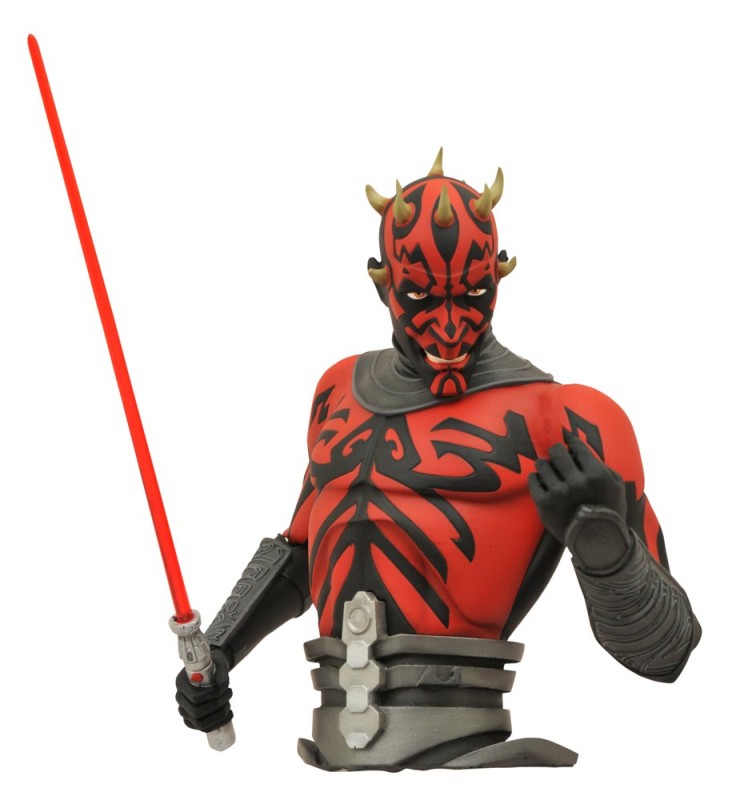 You can wait for Previews or hit the online retailers who are starting to offer these now.

The new Previews catalog won’t be out for a couple of weeks, but retailers are already opening up pre-orders for the new Diamond Select items that are in it! Not only will DST offer new items for Star Wars, Classic Godzilla, the Batman Classic TV Series, the Amazing Spider-Man 2 and The Walking Dead, DST is also bringing back two long out-of-production Marvel Select figures! Read on to see what’s in the works, and find your local comic shop at comicshoplocator.com!

Star Wars Clone Wars Darth Maul Bust Bank
The most exciting villain in the Star Wars universe has been re-animated! Darth Maul is back in the Clone Wars universe, and now the legendary Sith apprentice is the latest bank from DST! Measuring 8 inches tall, this vinyl bust bank features collectible-quality paint and sculpting, a removable lightsaber blade, plus a coin slot for depositing your loose change! Designed by Barry Bradfield. Sculpted by Oluf Hartvigson. (Item #JAN141923, SRP: $23)

Star Wars Boba Fett Magnetic Metal Bottle Opener
Boba Fett? Where? On your brand-new bottle opener, that’s where! Make sure you always have a way to open tasty beverages with this solid metal bottle opener, depicting the portrait of Boba Fett, super-cool bounty hunter extraordinaire! It measures 4 inches long, has magnets on the back and removes bottle caps like Boba Fett captures a bounty — with style! Comes packaged in a collector’s slip case with a full-color wrap.(Item #JAN141922, SRP: $18)

Godzilla Classic 1989 Vinyl Figure Bank
The This vinyl bank of the city-destroying and alien-fighting lizard called Godzilla is based on his appearance in the 1989 movie “Godzilla vs. Biollante”! Cast in sturdy vinyl, the bank features a coin slot hidden between the fins on his back, as well as an access door hidden inside his removable tail! Stands 12 inches tall and measures 18 inchesto the tip of his tail! Sculpted by Gentle Giant Studios! (Item #JAN141921, SRP: $34.99)

Batman Classic TV Series Robin Bust
Holy collectibles, Batman! DST continues their line of busts based on the Batman Classic TV Show, and this time they’re making the ultimate wingman! Batman’s sidekick Robin, the Boy Wonder (as played by Burt Ward) is the next 6″ resin bust in the new series from DST, and is the perfect companion to Adam West’s Batman. Pre-order today, because Batman’s gonna need all the help he can get once the villains start to arrive! Designed by Barry Bradfield! Sculpted by Jean St. Jean! (Item #JAN141926, SRP: $60)

Walking Dead Zombie Heads Silicone Tray
Party like the Governor with this all-new Walking Dead silicone tray! Based on the comic book artwork of Charlie Adlard, this flexible tray can be used to cast up ice, gelatin and even chocolate in the shape of a half-dozen zombie heads, as well as the famous Walking Dead comic book logo! Fill up the fishtank and let the fun begin! (Item #JAN141924, SRP: $15)

Walking Dead Minimates Series 5 Asst.
The Walking Dead Minimates are still kicking! For their fifth series, DST is bringing more fan-favorite survivors into the fold, as well as new versions of old favorites and another great zombie! Two-packs include Riot Gear Glenn with Maggie, Tyreese with Prison Michonne, Survivor Morgan with Geek Zombie and a rare one-per-case variant set of Martinez with Geek Zombie. Each Minimate mini-figure stands 2 inches tall, with 14 points of articulation and a variety of interchangeable parts and accessories. Designed and Sculpted by Art Asylum! (Item #JAN141925 , SRP: $9.99ea.)

Marvel Minimates Series 56: Amazing Spider-Man 2 Asst.
The most eagerly anticipated sequel of the year is getting a sequel set of Minimates! This assortment will include four two-packs, including Battle-Damaged Spider-Man with Electro, Spider-Man with Norman Osborn, Graduation Peter with Gwen Stacy and a rare, one-per-case set featuring Alistair Smythe with Aleksei Sytsevich! Each Minimate mini-figure stands 2 inches tall, with 14 points of articulation and a variety of interchangeable parts and accessories. Designed and Sculpted by Art Asylum! (Item #JAN141927, SRP: $9.99ea.)