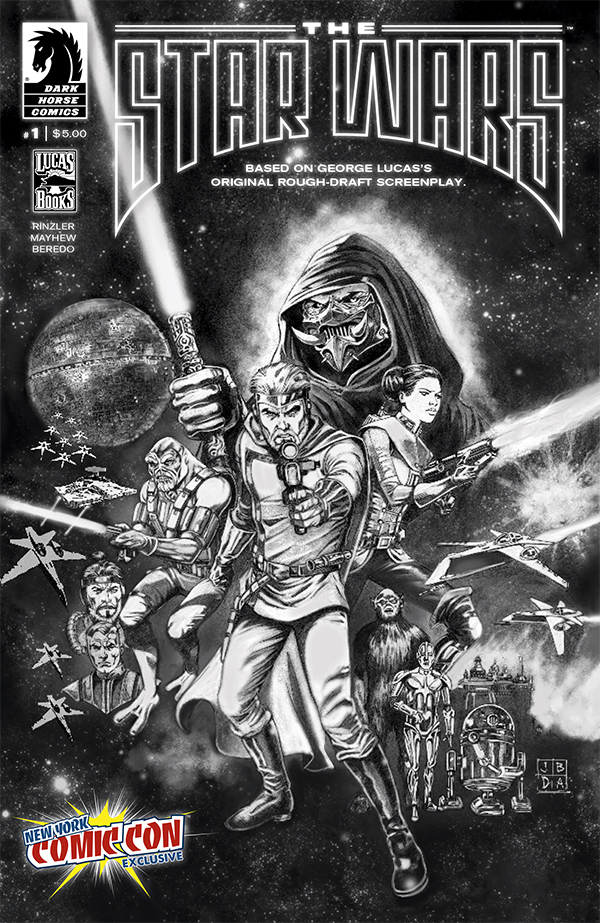 Dark Horse will be offering several exclusive items at this year’s New York Comic Con, including an exclusive variant cover of “The Star Wars” #1.  Limited to 1,000 pieces, the black and white cover edition will be $5.00 at the Dark Horse booth, #1636.

Also available will be a Domo Qee and “Elfquest: The Final Quest.”

OCTOBER 2, MILWAUKIE, OR—New York Comic Con, the largest pop culture event on the Eastern Seaboard, is right around the corner, and Dark Horse is bringing you the latest and greatest in exclusive comics and Dark Horse Deluxe products!

Before Star Wars, there was The Star Wars! This is the authorized adaptation of George Lucas’s rough-draft screenplay of what would eventually become a motion picture that would change the world.

Elfquest is a winner of the Golden Pen Award from the Young Adult Advisory Committee. This special, an oversized prologue to the Elfquest: The Final Quest series, marks thirty years of Elfquest action and adventure!

A 2.5-inch Qee version of Domo unavailable anywhere else, packaged in a color box.

Availability: Four per person, all days

Make sure to stop by booth #1636 to check out all this awesome stuff, only available at New York Comic Con 2013!

Founded in 1986 by Mike Richardson, Dark Horse Comics has proven to be a solid example of how integrity and innovation can help broaden a unique storytelling medium and establish a small, homegrown company as an industry giant. The company is known for the progressive and creator-friendly atmosphere it provides for writers and artists. In addition to publishing comics from top talent, such as Frank Miller, Mike Mignola, Neil Gaiman, Brian Wood, Gerard Way, Felicia Day, and Guillermo del Toro, and comics legends, such as Will Eisner, Neal Adams, and Jim Steranko, Dark Horse has developed its own successful properties, such as The Mask, Ghost, Timecop, and SpyBoy. Its successful line of comics and products based on popular properties includes Star Wars, Mass Effect, Buffy the Vampire Slayer, Aliens, Conan, EVE Online, Halo, Serenity, Game of Thrones, and Domo. Today Dark Horse Comics is the largest independent comic book publisher in the US and is recognized as one of the world’s leading publishers of both creator-owned content and licensed comics material.