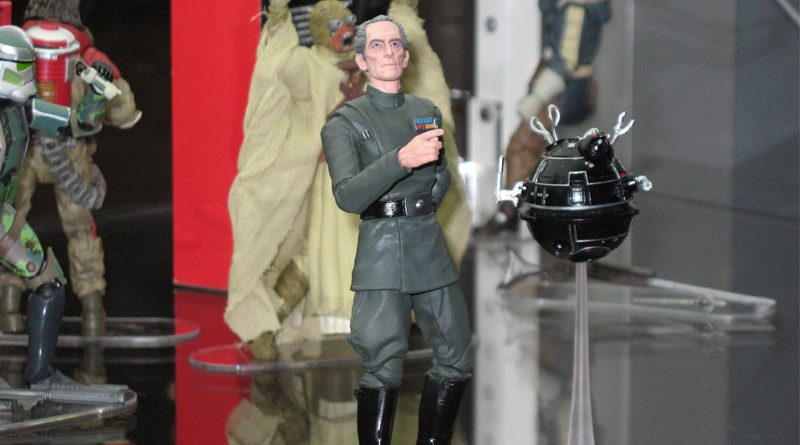 As Celebration weekend wound down, we stopped at the Hasbro booth at took a few more photos, including some better closeup shots of the new Tarkin and Jaina Solo figures. We also had a couple of questions answered by one of the Hasbro reps.

We asked for some clarification on the San Diego Comic-Con exclusive Luke Skywalker with Landspeeder. While the price hadn’t yet been set, plan on it being in the $90 range. The Luke figure and accessories are the same as those that will come in the regular release while the Landspeeder will feature some additional paint applications and one additional feature; the engine will have some articulation that will not be included on the regular release.

We forgot to ask about the price for the SDCC exclusive version of Thrawn, but the packaging and additional accessories are outstanding. Included in the package, along with Thrawn, are Gree’s helmet, a Jedi Temple Guard helmet, the Holy Grail and a sculpted art piece that displays above Thrawn in the package.

The additional accessories and the upgraded Landspeeder make both of these exclusives very desirable.

The Forces of Destiny figures will come in a price range from about $20 for the basic figures up to $35 for the deluxe releases. Individual figures will be priced on the lower end while figures with companions or additional outfits will range upward to the $35 price. Some neat features of the figures include flocked “hair” on Wicket the Ewok and Chewbacca will feature sounds.

A specific retail price for the return of the Vintage Collection wasn’t given, but when I asked if it would be in the same range as the Walmart exclusive Black Series figures, Hasbro seemed to indicate it would be. Currently the Black Series is $12.84 at Walmart and we won’t be surprised to see $12.99 or possibly $1-$2 higher at all retailers. The only comparison we have right not would probably be the Marvel Legends Series figures which are $12.99.