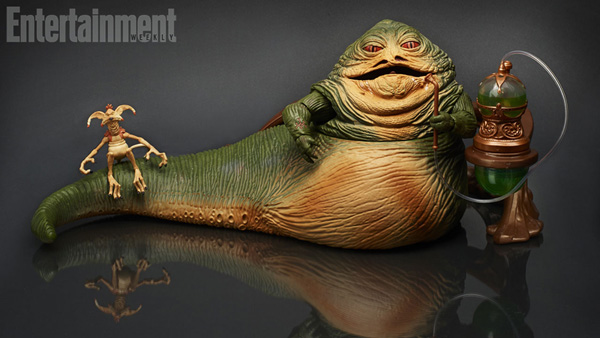 Entertainment Weekly revealed this year’s San Diego Comic-Con Star Wars exclusive; a 6″ Black Series Jabba the Hutt and Salacious Crumb.  This was hinted at after this year’s Toy Fair but the confirmation is in, along with pictures of the figures and packaging.

The cardboard packaging looks like Jabba’s palace, including his dais and a slot for Han in Carbonite.  Along with the exclusive Salacious Crumb, Jabba also has his hookah.  Jabba will be released at regular retail later this year, but the exclusive is sure to be attractive to many collectors.  No price was mentioned but we’re guessing it’ll be more than last year’s Boba Fett which rang in at $45.