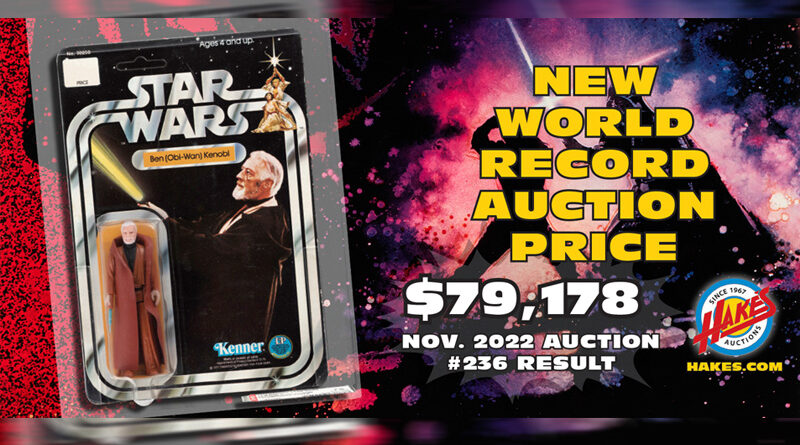 You know that old hermit who lives out by the Dune Sea? Well, he may be looking for better digs soon. A carded action figure of Ben (Obi-Wan) Kenobi with a double-telescoping lightsaber recently sold for $79,178, setting a record for a carded Ben Kenobi figure, and reaching the second-highest price ever paid for any carded Star Wars figure.

The auction, held by Hake’s Auctions, featured several different versions of the Kenner-made Obi-Wan Kenobi from 1978. The record-setter had a few things going for it, though, including the aforementioned double-telescoping lightsaber (quickly abandoned by Kenner), a SKU number on the yellow footer (inside the plastic blister), an unpunched card, and a grade of 75 EX+/NM from the Action Figure Authority (a division of Collectible Grading Authority).

“This auction’s results are extraordinary,” said Alex Winter, president of Hake’s Auctions. “For an Obi-Wan to reach such a high price, let alone set the record, is an amazing outcome, and we hope that the consignor is happy with the final price. Even uncarded double-telescoping Obi-Wans can go for big numbers, so everyone out there check your lightsabers.”

This auction at Hake’s, #236, also featured a number of pre-production Star Wars items, including a Yoda doll prototype, a Han Solo 12-inch figure in prototype costume, an IG-88 hand-painted prototype, a number of unused backing cards, and a carded sample of Princess Leia on Hoth, wearing a pink poncho, which went for $42,834.