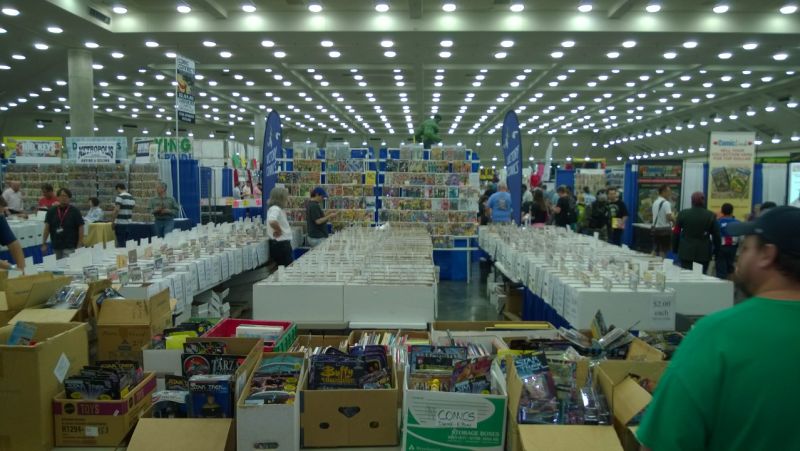 The 2014 Baltimore Comic Con expanded to three days, adding Friday to the schedule and relocating to a larger space in the Baltimore Convention Center.  The show opened at 1:00 on Friday and Joe K and I were there early, picked up our credentials and hit the floor with no game plan other than to have fun.  And we did.

With school in full swing and many people working on a Friday, the convention floor was not packed and combined with the larger space, the aisles were large and uncramped (even on Saturday with the larger crowd).  It was very easy to browse through the vendor booths and look at all the product that was being offered.

Artist Alley was once again impressive with a huge roster of talent offering various styles of artwork with most, if not all, doing commissioned sketches during the show.  Shopping is fun but Artist Alley was our first stop.  Being early in the weekend it was easy to stop and chat with artists about their work and to browse through their portfolios.  And if you read our Artists and Sketches article from Wednesday, you get a glimpse at just how incredible the artist’s work can be even in a short amount of time.

The small press booths were generally together at the front of the hall and this year Devil’s Due, Archive Comics, Avatar, Boom Studios, Valiant and Zenescope were among those showing off their current and upcoming titles.

As I mentioned, the expanded space for this year’s convention allowed larger aisles between booths on the dealer floor and it was much appreciated.  Not only was it easy to walk through the aisles and see the booths from the outside, you could stop and rifle through pegs of toys or boxes of comics without feeling like you were impacting the flow of traffic behind you.  It was even easier to stop a cosplayer to get a picture without holding things up.

The dealers were offering a lot of comic books, both new and old, and it’s great to actually see comics at a comic convention.  Half priced trade paperbacks and dollar bins were in abundance as were pages of original comic art, Golden and Silver Age, graded and not, a little of everything.

Collectibles ran the gamut from action figures and toys to busts and statues, 1:6 scale action figures, cosplay items, jewelry and clothing.  One of the popular range of collectibles were Funko’s Pop! Vinyl.  There were serveral booths with large selections from common releases to show exclusives, and they were selling very well.

Peter Mayhew attended the show and held a panel on Sunday afternoon.  While there was no talk of Star Wars: Episode VII, Peter did speak about moving from his original career choice, as and engineer, into acting and how that came about.  He had some fun stories of filming not only the Star Wars movies but also Sinbad and the infamous Star Wars Holiday Special.

The Baltimore Comic Con is still small enough that you can easily see the entire dealer floor, Artist Alley and autograph guests in one day but with the panels added in, keep you busy for three days.  The added space made it feel less crowded but much easier to shop and take pictures without feeling like you were in someone’s way.  Plus, with the third day, some things felt less rushed and allowed us more time to meet up with friends and take a lunch break without feeling like we were missing something.

I think I had more fun this year than last, loved Artist Alley and had an excellent weekend in Baltimore.  Here’s looking forward to next year when the convention runs from September 25-27, 2015.