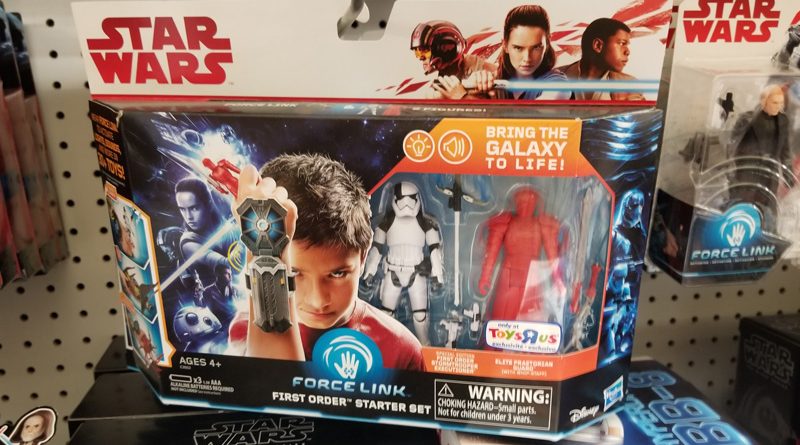 If you’ve been reading the news, you’ll see that Toys-R-Us, after filing for Chapter 11 bankruptcy in September 2017, may now be on the verge of going out of business in the US. The initial announcement of the closing of 180 stores may be just the start.

With that in mind, I took a trip to Toys-R-Us in Horseheads, NY yesterday, a store not part of the initial store closings, to see what shape it was in, what was in stock, if there was a decent crowd of shoppers, etc. The last time I was in the store was on Force Friday last September when the Star Wars: The Last Jedi toys were released.

In general, the store was in good shape. There was plenty of stock on the shelves, including recent releases from Hasbro, Lego, and Mattel, there were quite a few people in the store shopping (and buying), and they were doing a Beyblade demo. The amount of clearance items wasn’t out of the ordinary although the argument could be made that there were a few sections, probably the Star Wars area, that could do with a few more clearance priced items.

There were a handful of new The Last Jedi 3.75″ figures but they had more of the Rogue One releases including figures such as Chirrut Imwe, and Rebels Kanan in Stormtrooper disguise. They had the Rey and Praetorian Guard 2-packs and both the regular release and their exclusive Force Link Starter Sets. There was a selection of all of the Last Jedi vehicles, at all price points, and they still had both Rogue One and The Force Awakens vehicles like the AT-ACT, TIE Fighter, Millennium Falcon, and Finn’s Jakku Speeder. Rey’s Speeder and Kanan with Y-Wing were on the pegs next to the two Rebels speeder sets, Ezra and AT-DP Driver.

The Black Series 6″ figures were not well represented. There was a lone 40th anniversary Death Star Trooper and a handful of Darth Vader with stand sets. The exclusive Admiral Ackbar and First Order Officer 2-pack and Rey figures were on the shelves but the regular release figures were older, with a few Eadu Cassian Andor figures, Jyn, and K-2SO.

Role play items, both regular and exclusives, had a lot of shelf space from the $10 basic lightsabers to Force FX, NERF blasters, and the Forces of Destiny set. There was also a nice selection of Galactic Heroes figures and toys, including single carded, 2-packs, and even both versions of the AT-AT.

Funko Pops! had a decent sized display in the same aisle as the Star Wars figures but I didn’t pay that close attention to what was there, or what should be there considering store exclusives.

On the Lego front, the store seemed to be well stocked of all of the relevant themes, including Ideas where both the Saturn V and Women of NASA sets were available. It looked like the full assortment of Star Wars sets were there, minus the obvious UCS sets, including the new Mos Eisley Cantina, and Ahch-To Island Training. They even had the 30277 First Order Star Destroyer and new DJ minifigure polybags.

Mattel had a rather large selection of Hot Wheels toys but the Star Wars themed section didn’t have a lot of offerings. There were a handful of Character Cars and a couple vehicles, including some in the 40th Anniversary package. The largest selection included the Car Ships.

On other fronts, the selection of Marvel toys was a mixed bag. There were some recent-ish Legends figures, including Black Panther, but there didn’t seem to be any sign of the new Avengers: Infinity War releases. There were other new Avengers figures, including the 12″ and the Hero Vision 5″ figures and role play items. It also looked like they had their full line of Alexander Doll Company Marvel Fan Girl line of dolls.

The Transformers section didn’t seem to have a lot of empty space but, as usual, I have no idea what should be there and what was leftover from previous releases.

The DC and Justice League areas were full and there seemed to be a decent selection of all scales of action figures.

Getting back to clearance stuff, the Disney Infinity Star Wars starter sets were $1.98 each and they had Xbox 360, PS3, and WiiU all on the shelf. The Lego Dimensions weren’t on clearance but were much reduced from a half aisle down to a 4′ section in the regular Lego aisle. Other game figures were still in stock but overall, they have a much reduced footprint from what they used to have whether they were regular priced or discounted.

Having not been in this particular store in a few months, and reading about the bankruptcy news, I expected to find a store that looked more in jeopardy of closing soon, but that wasn’t the case. It’s also a reminder that were it not for the debt heaped on the organization by the companies that purchased it in 2005, Toys-R-Us with a 15% market share of toy retail should be doing okay.

Continuing with yesterday’s run, I stopped in Target not expecting to find much and, unfortunately, wasn’t disappointed. Although they had the new Battle on Crait 4-pack, the selection of Black Series 6″ figures consisted of 7 Maz Kanata figures and a smattering of other characters like Luke, Rose, exclusive Executioner Trooper, and Jedi Training Rey.

The 3.75″ figures were current with exile Luke, Island Rey, and General Leia. Vehicles were stocked, the large BB-8 playset was on the shelf and there was a selection of role play items including NERF, lightsabers, and masks.

The Avengers releases only included the 12″ and Hero Vision and, again, no Legends figures. The Horseheads store had a lot of Justice League toys in stock and the Transformers section looked full.

Much of the Lego aisle was stocked but there were a few empty slots in the Star Wars section. Didn’t bother to see what exactly was missing but assume that all sets will be available at some point.

The only real surprise was finding a couple Rogue One 2-packs in the clearance section; Seventh Sister with Maul and the Pao with Death Trooper for $7 and change.

There have been some reports of newer tail-end Rogue One figures showing up at Five Below so it was worth a stop. They ended up not having anything unique on the single carded front but they did have a good selection of 2-packs including the Sister/Maul and Pao/Death Trooper sets and a surprise Scarif Trooper with Moroff for $5 each.

There was a selection of 12″ figures, mostly Cassian and Jyn, and they had several Titanium Helmet 2-packs, numbers 2-6.

If Hasbro needs an example of why re-releasing the Rathtar figure, the picture above should be exhibit 1; there were 33 packs on clearance for $10 each and only one set was Darth Vader with the Probe Droid. My local store has over 20 and only 4 or 5 are the Vader set, and they’re still full price. Add to that, Toys-R-Us and Target also have stock of this set, although not on this scale. This, along with the next piece, also shows why losing Toys-R-Us and trying to count on Walmart for toys is a really, really bad plan.

Between the clearance aisle, where the Rathtar figures were, and the regular aisle, the Horseheads store had 53 Black Series 3.75″ figures for $4. That included:

The only shock is that there were no Han Solo figures. But for one store to have that kind of stock, it’s ridiculous. It’s also probably a good indication that putting Jyn in the first wave of the new Vintage Collection was probably a bad choice. Also guessing Rey wasn’t a good choice either.

The Black Series 6″ line, all on clearance for $5, included all of two characters; Eadu Cassian and Jyn. Like just about every other Walmart store.

The Horseheads store has a small selection of Lego and other action figures and didn’t have much of note. Walmart will not be a good replacement for Toys-R-Us should they go out of business.

Horseheads is home to one of the last Kmart stores in this area of NY. I was actually surprised to find it still open when I drove by so I stopped on the way out of town. While the store didn’t have a lot of empty shelves, there was a noticeable lack of stock in general around the store. While there were no huge clearance sections in the store, a lot of aisles I looked down had clearance tags hanging in them. That included signs for an additional 40% off clearance yesterday.

The Star Wars section was quite small but they did have some more recent 3.75″ The Last Jedi figures. They had the A-Wing/Canto Bight Speeder wave of vehicles but not any of the other scales. The Black Series 6″ pegs did have a couple of First Order Stormtroopers which would be a good score for some collectors.

The Lego section did have quite a bit of bare space on the shelves and there were some older sets but I also spotted some newer Marvel superhero sets. I didn’t pay close attention to what was on the shelf because everything can be found at other retailers.

Kmart isn’t in the best of shape either but it’s still worth a look once in a while if you have a store near you. There may still be some gems to find since they don’t seem to fall into the trap that Walmart and Target have where they over order initial waves of figures.

Even though this was titled as a Toys-R-Us edition, when you’re driving 40 miles to get there, you stop at the other stores in the area as well. My main goal was to see how things looked at Toys-R-Us as far as stock, customers, and general atmosphere go. In general the store looked good and not like one that may be heading out of business as soon as later this week. It’s a reminder that had the buyout in 2005 not transferred billions of debt onto the company, Toys-R-Us might be in much better shape and we wouldn’t be looking at the potential end.

I’m not a finance guy but it seems like a company able to handle the loans and debt that Toys-R-Us has could look at buying them. Amazon seems to be the first company that comes to mind, especially since they’ve recently been expanding their retail locations. Even if some stores, above the 180 already announced, were closed, buying Toys-R-Us would give them a spot at local retail with a name that’s as well known as their own and has a loyal customer base. We’ll see.

I spent at least an hour looking through the store not only for what I’ve posted about but what other gems might be sitting on a shelf. That’s not something you can do at Target or Walmart, and definitely not online. If Toys-R-Us closes it’ll be a huge hit to toy fans and kids. It’s also going to make it much harder for smaller toy companies to find a partner that will put their offerings in front of people to find on their own.

On top of looking at Toys-R-Us I was also looking to see what kind of Star Wars stock was around. I was disappointed to not find a better selection of Black Series figures. That’s a problem that falls somewhere between poor choices by Hasbro and ordering issues by retailers. I don’t have a lot of hope that the return of The Vintage Collection is going to solve any problems or fair better than the Black Series line. Only time will tell.