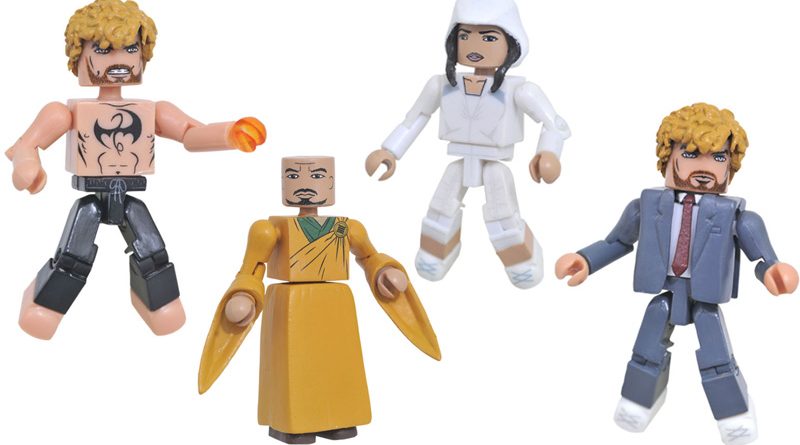 It’s New Toy Day at comic shops across North America, and it’s a big day for DST, as they ship three new assortments of Vinimates vinyl figures, as well as three new products from the Marvel Netflix universe! With Vinimates from DC Comics, Elf and Back to the Future II, Minimates from Marvel’s Iron FIst and PVC DIoramas from Marvel’s Daredevil, there’s something for everyone at your local comic shop! Find a store near you or order through your favorite online retailer!

Back to the Future 2 Movie Vinimates Vinyl Figures
A Diamond Select Toys Release! Great Scott! Marty McFly and Doc Brown have just jumped forward in time again, and they’re getting new outfits to blend in to 2017! These 4-inch vinyl figures based on the second film in the Back to the Future film trilogy are sculpted in a block-figure style, striking poses straight from the movie poster, and feature articulated necks for further customization. Each comes packaged in a full-color window box.
Future Doc Vinyl Figure (Item #MAY172513, SRP: $9.99)
Future Marty Vinyl Figure (Item #MAY172514, SRP: $9.99)

Marvel Gallery Netflix TV Daredevil PVC Diorama
A Diamond Select Toys Release! The Netflix-based series of Marvel Gallery PVC dioramas continues with none other than Daredevil himself! Joining Luke Cage and the Punisher, this approximately 11” sculpture depicts the TV version of the horned hero of Hell’s Kitchen in amazing detail. Capturing the likeness and costume of actor Charlie Cox, this diorama sees Matt Murdock standing on a rooftop pedestal, his billy clubs at the ready. Daredevil is in scale to all Gallery and Femme Fatales PVC dioramas, and comes packaged in a full-color window box. (Item # APR172653, SRP: $45.00)

Marvel Gallery Netflix TV Punisher PVC Diorama
A Diamond Select Toys release! Prepare to be punished! The second Marvel Gallery PVC Diorma from the world of Marvel’s Netflix TV series is none other than the Punisher! Featuring the likeness of actor Jon Bernthal, this approximately 12-inch PVC diorama depicts the Punisher as he appears at the end of Daredevil Season 2, standing atop a Hell’s Kitchen rooftop with Daredevil’s cowl in one hand and a high-powered rifle in the other. Diorama comes packaged in a full-color window box. Sculpted by Gentle Giant! (Item #MAR172720, SRP: $45.00)

Find a comic shop at comicshoplocator.com!