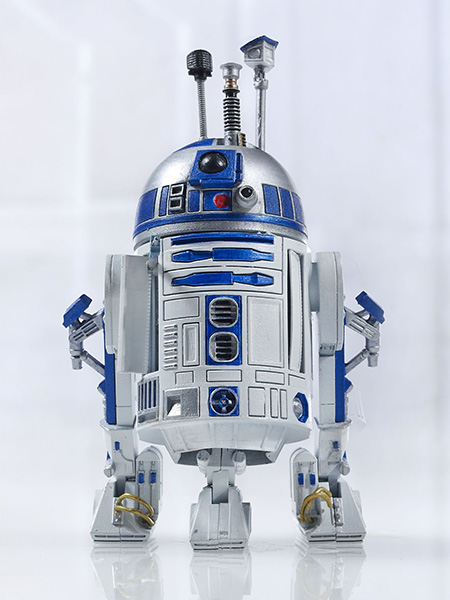 The 2013 American International Toy Fair closed its doors last Wednesday and left us with an idea of what toys we’ll be seeing on store shelves over the next 10 months.

This is a big year for movie action figures with Hasbro releasing lines for G.I. Joe, Iron Man 3 and Thor, NECA has Pacific Rim and The Lone Ranger, Mattel and others will be offering up Man of Steel and even Lego is on board with Star Wars, Lord of the Rings and The Lone Ranger, not to mention their continuing Marvel sets.

Lego showed off some really fun toys for 2013, both in existing lines such as Star Wars and Lord of the Rings, but also in new, The Lone Ranger, and revisited, Castle, properties.  The Stagecoach Escape (79108) from The Lone Ranger line is excellent.  It seems to capture all the fun elements you could want from a western theme, and it’s still reasonably priced for a quality Lego build.

I also like the looks of the new Play Arts Kai series of DC Comics superheroes from Square Enix.  The highly stylized action figures of Wonder Woman and Batman feature lots of articulation and accessories.  Their take on the Flash is interesting and not something I think we’ve seen before.  I’ll also be interested in seeing final production pictures Batgirl.

Being a G.I. Joe fan, it was exciting to see Hasbro take a shot at one of my favorite vintage vehicles, the Tomahawk.  Now called the Eaglehawk, the helicopter features some updated seating and rotor blades along with classic features such as the winch and opening rear door.  General badassery also still included.

Hasbro’s Black Series of action figures, covering both the new 6″ scale and the existing 3.75″ figures, may turn out to be decent lines of toys.  Hasbro is promising nothing but new sculpts for the smaller line while the larger line will have a moderate release schedule and stick to the most iconic heroes from the Saga films.  With 2013 almost being a lost year due to changes in the 3D movie release schedule and residual problems from 2012, I’m hoping Hasbro can take a beat before coming back stronger in 2014.  Next year will probably be a transition year before they have to delve into the new Disney Star Wars films and there’s the possibility we could see them check off a lot of characters from their infamous “parking lot.”

In a toy market that’s seen a lot of price increases in the last two years, I can respect a company for looking at ways to keep costs down.  Going to 5 points of articulation (PoA) for a full line of action figures where you’re only creating new versions of existing characters may not be the best way to go about it.  Hasbro was already reducing PoA on their Clone Wars line, which I feel suffered an unnecessary cancellation, where it seemed to be working, but to come out with a new Saga Legends line to tackle Saga characters?  Throwing in Anakin, meaning they’re tripling up on him this Fall, along with Yoda and a Super Battle droid, which already have some basic articulated versions, may not be the best choices for launch.

I will give them this; the new Saga Legends look, and according to Hasbro, feel, like the vintage Kenner toys a lot of us grew up with.  They do look to be sculpted well and as long as they make decent toys, there could be a market for them.  Even with assembly costs rising, Hasbro already has quite a few figure versions available to them that feature fewer points of articulation and I have to wonder why they don’t try to leverage those before investing in brand new sculpts and tooling.

Also, the 12″ line of Hasbro Star Wars figures?  Completely unnecessary.  There’s no argument for them.

On the best of Hasbro:

I’ll go with the 6″ Black Sandtrooper.  Fantastic sculpt and spot-on deco.  Looks gorgeous in person.  Runner up would be the LEGENDS 4″ figures, just because they turned out way better than I expected and they really take me back to Vintage toys.

On the worst of Hasbro:

The LEGENDS 12″ figures are awful. Even the Hasbro guys were making excuses.  “Intended for foreign markets” and such.

On the best of Toy Fair:

No question there: Tamashii Nations Perfect Model 3PO.  When they say perfect they mean it.  It’s the most amazingly crafted Star Wars toy I’ve ever laid eyes on.

On the worst of Toy Fair:

Now that is a tough one.  I mean, the 12″ LEGENDS figures are right up there… but it feels like a cop-out to go with that.  There were these awful rectangle face-shaped soft zipper pencil case-type things where the zipper made a mouth and you could pull a tongue out sometimes.  But the “flesh” of the face was all stretched out and folded kinda like something you’d see in Hellraiser.  They were intended to be “gross” and were really just ugly. I can’t imagine anyone ever buying one. I didn’t get the name though, so that’s probably not very helpful.