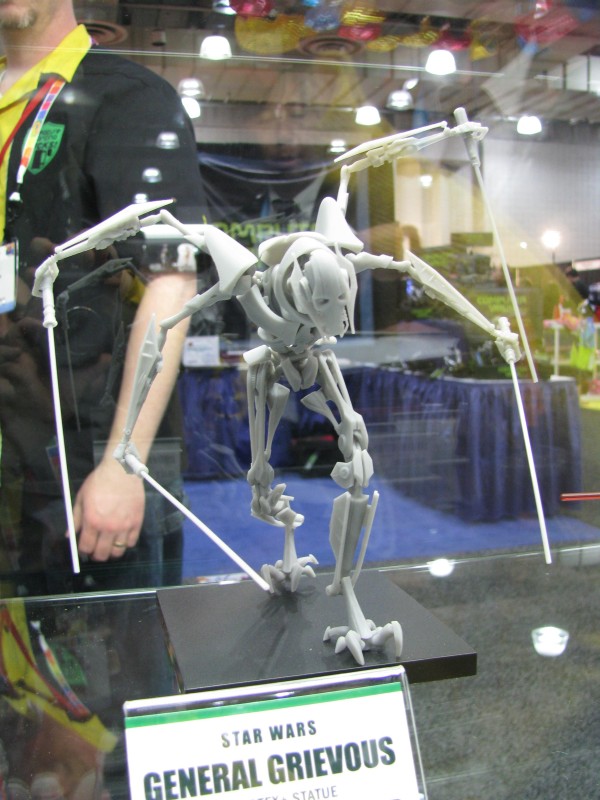 Kotobukiya has come a long way from the early vinyl model kits they started with, now producing some of the more interesting statue collectibles of the Star Wars property.  But they also have a huge presence in the Marvel and DC Comics field and are no strangers to video game properties.

At Toy Fair they teased a new General Grievous ARTFX+ Statue that could possibly be the best version of him since Sideshow’s incredible Premium Format statue.  The detail looks really good on the prototype they showed, and with paint and final details, could be a home run.

Also on display was their new Jango Fett statue and his son, Boba.  Darth Vader, the Royal Guards and a contingent of Stormtroopers joined them.

Kotobukiya’s first Bishoujo Star Wars statue is out now, Jaina Solo, and Mara Jade is next on their list.  During Joe’s Q&A with Koto, they mentioned Leia was next on their list but not exactly what version, only that it won’t be her Return of the Jedi bikini.

Also, if you’ve seen their excellent Han in Carbonite business card holder, good news, it should be coming to the U.S. market.

Comics and game fans take note, Koto was showing off a prototype for a Kitty Pryde Bishoujo statue, coming in June, and artwork for Black Canary, due in the 3rd quarter.

Last week was the release of the new Visceral Games and Electronic Arts game, “Dead Space 3,” and Kotobukiya will soon have a statue available of the main character, Isaac Clarke.  The 12″ tall statue features lights and will be out in June.