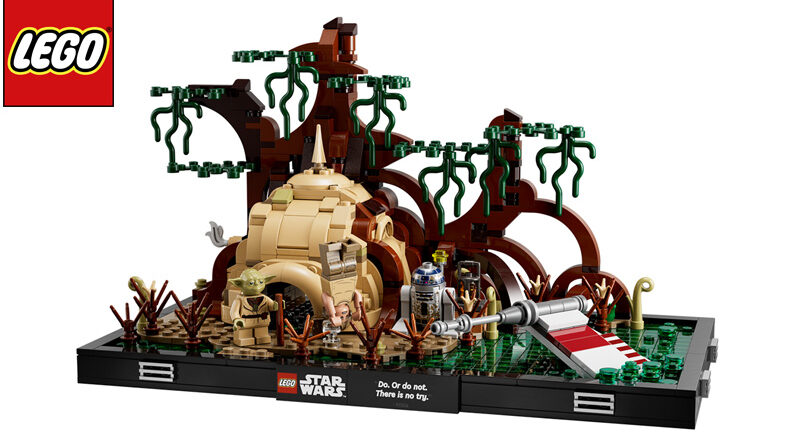 LEGO has premiered three new diorama sets from the Star Wars universe. All three are based on Original Trilogy films and range in price from $60-$90. Lego is currently taking orders with all three sets reporting an April 26, 2022 release.

75330 Dagobah Jedi Training Diorama includes 1000 elements for $79.99. Jedi Training takes a look at Luke Skywalker’s training by the Jedi Master Yoda. Three minifigures are included in the set, Luke, Yoda, and R2-D2. The build features Yoda’s hut along with trees and swamp details and a wing of Luke’s X-Wing, sunken in the swamp. “Do. Or do not. There is no try” is the featured quote for Dagobah Jedi Training.

75339 Death Star Trash Compactor Diorama has 802 elements for $89.99. Six minifigures are included; Luke Skywalker and Han Solo in Stormtrooper disguise, Princess Leia, Chewbacca, R2-D2, and C-3PO. There’s also a trash compactor monster and the set features moving walls to put our heroes in jeopardy. “One thing’s for sure. We’re all gonna be a lot thinner!” is the featured quote from Han Solo.

The links above will take you to the LEGO website where pre-orders are available for all three Diorama sets.