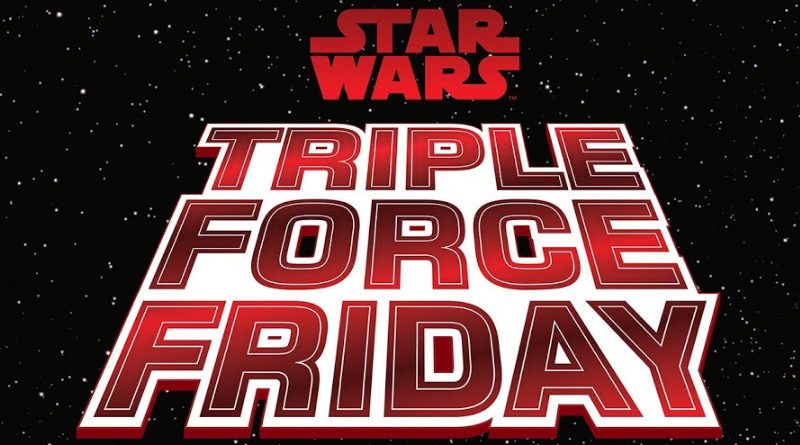 Today we’ve seen the official announcement for toys and collectibles that will be released on Friday, October 4, 2019. Triple Force Friday includes items from Star Wars: The Rise of Skywalker, The Mandalorian, and Star Wars Jedi: Fallen Order.

Many of the releases were teased either by excellent sleuthing or items leaked in stores like Walmart. Some of what we’ve posted below were shown off on the livestream earlier today while others are still considered rumors, even though photos and product leaks have confirmed them.

Black Series first wave will have eight characters from The Rise of Skywalker along with The Mandalrian and Fallen Order. Some announced figures will be in subsequent waves such as Jannah and Cara Dune. There will be launch variations of the figures in white boxes along with Carbonized versions of the figures which sport special paint applications.

The Skywalker Strikes release of Luke Skywalker features him in his Yavin 4 medal ceremony outfit and includes additional accessories. Some of the releases may be store exclusives that have mostly been confirmed via online searches, but there are still some announcements to come as to availability.

Galaxy of Adventures figures move to a new 5″ scale and replace the tube packaging from the previous releases with new boxes. The figures, rather than being re-released 5 Points of Articulation (POA) figures, are new sculpts and look more like the animation from the online shorts.

There will be nine 2-packs in the line and feature gold deco versions of the figures. Each 2-pack represents a film in the Skywalker Saga with four of the packs shown and confirmed while the rest are still rumors until confirmed.

Some of the Lego sets announced below don’t have full listings of the minifigures yet as that info is still under wraps. With the exception of the UCS Yoda set, the rest are from The Rise of Skywalker and The Mandalorian. Also included on the list is 40362 Battle of Endor Micro Build which will be free with a $75 purchase starting October 4th. Lego will also be offering 2x VIP points along with the promotion.

Funko has a series of Pop! figures coming with characters such as Finn, Poe, Rey, The Mandalorian and Cara Dune, Jannah, Lando, Zorii Bliss, and Chewbacca among others.

On the role play and interactive front, Hasbro will have a new interactive D-O app controlled droid that can be driven around and plays sounds. Think of the Sphero BB-8 and R2-D2 droids. Hasbro also has role play lightsabers and a Kylo Ren mask.

Many of the items shown off today, and many of the rumored toys, will be available beginning on October 4th. There are no midnight openings at Target stores and it’s unclear if Walmart stores, many of which are open 24 hours, have confirmed they’ll have product available at midnight. Online stores will likely launch sales on the 4th and we’ll keep an eye on them for midnight EST postings.

There are a lot of other items that are still rumors, for now, including The Vintage Collection releases of Poe Dameron and Luke Skywalker’s X-Wings, more Black Series, and The Vintage Collection figures. Although SKU and UPC info is available for many of them, they have not been officially announced. Keep an eye on YakFace.com for updates and rumors and their upcoming Triple Force Friday checklist.