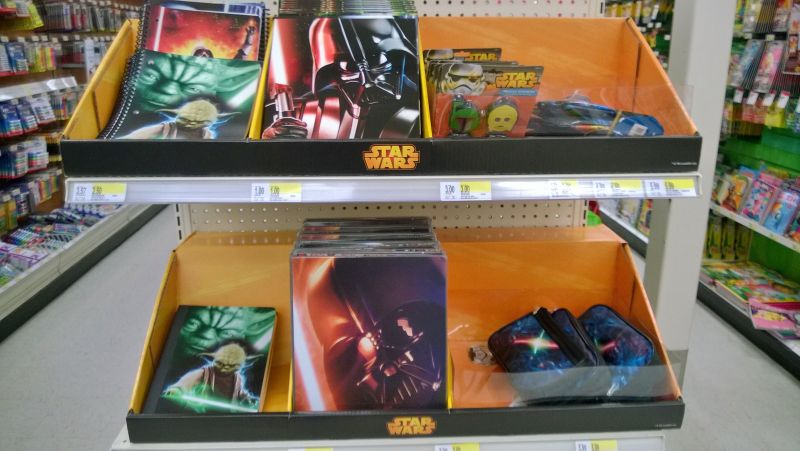 Target has already set their Back to School seasonal shop and popular themes this year include Star Wars, Marvel, My Little Pony, Frozen, Minions, and DC superheroes.

We found several Star Wars themed items both in the seasonal shop and on an end cap display near the office supply section.  Many of the graphics were shared among the various items and feature Yoda, R2-D2, Darth Vader and a Stormtrooper.  Items included spiral bound notebooks, composition notebooks, folders, pencil tin and zipper case, pencils, and erasers.  Notebooks were $2.50 each while the folders and pencils were $1.00 each.  The pencil tins were $2.99 while the zipper cases were $5.99 and the erasers were $3.00.

Thermos has several food related items including a Darth Vader thermos, C-3PO jar and R2-D2 water bottle (not pictured).  The R2-D2 lunch kit, with lights and sounds, is back again this year after being very popular (and selling quickly) last year.  The Thermos items range from about $14.99 to $16.99.

We also spotted three change holders of Darth Vader, R2-D2 and a Stormtrooper.  They’re all plush and stuffed with a clip on top, a zipper on the back and a small pocket to store items.  They were $5.99.

There were a couple of empty spots still, especially in the end cap, and we didn’t take photos of everything. If you’re in Target, it’s worth taking a look both in the office supply and seasonal sections to see what’s around.