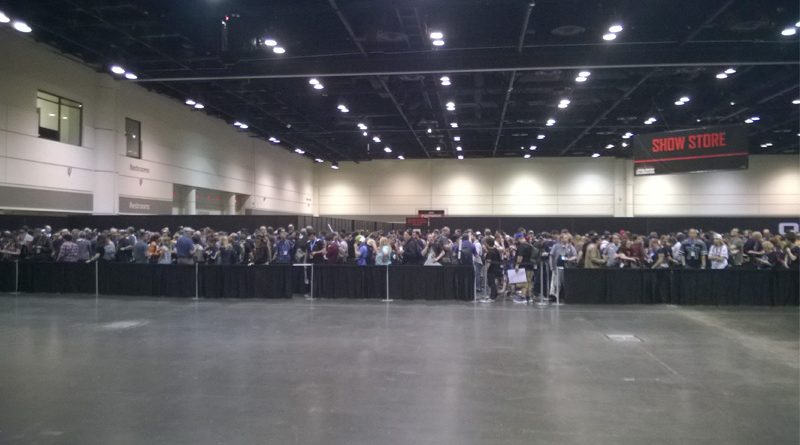 The other day we posted the positives of Star Wars Celebration Orlando, but no matter how fun the event was overall, there were some things that could be improved. Today we’ll take a look at a few of them.

The first thing we wanted to point out are the increasing number of reports of fraudulent credit card transactions post-Celebration. At least two members of the Pennsylvania Star Wars Collecting Society (PSWCS) reported fraudulent charges on their cards in the week after Celebration. Savanna Kiefer of The Dorky Diva was the first person to make us aware of the reports, including that not all of the victims used their cards during the convention. That would seem to point to RFID scanners being used to compromise cards.

So, if you attended Celebration Orlando, check your credit cards and make sure you’re as secure as you can be.

While compromised cards aren’t something that ReedPop was responsible for, it does stand out as one of the low spots for attendees.

Something that was in their control, however, were the security and queue hall lines. Thursday, by all accounts, was a mess for those trying to get in for wrist bands to attend the 40th Anniversary panel. Long queue lines outside the building overwhelmed security on Thursday morning leading to multiple hours of frustration for many trying to get into the Orange County Convention Center. Reed, to their credit, acknowledged the issue and made additional entry points available for Friday and the rest of the weekend.

Reed has been dealing with 100,000+ crowds at New York Comic Con for the past couple of years, they know how to do it, but Celebration is unlike any other convention. It’s not just that it’s dedicated to one franchise or that it’s grown to a large size, 70,000 in Orlando, it’s that the fans have a different mentality when it comes to lines. Weeks before the convention, fans were already posting online about how they were prepared to wait in line for a full day to get into the early panels Thursday and Friday. We’ve been to NYCC early and haven’t seen that kind of dedication.

We’ve heard stories of long lines at the last couple of Celebrations but this year gave us flashbacks to Celebration II and III in Indianapolis. Hopefully, in the future, these problems will be addressed from day one.

The Celebration Store has had issues of various types at almost all previous events. The Celebration IV Store, which was open 24 hours a day and had entrance by appointment during the day, may be the only one that didn’t have major problems.

This year we saw long lines and multiple hour waits to both get in and checkout. The checkout lanes at least were staffed by knowledgeable people but when you have that many people looking to go through the store there will be issues. Not having a full list of all of the Store merchandise pre-Celebration, not to mention no prices, may have added to the rush of people to get in to see what was available.

Other things that could have been announced ahead of time include the fact that Celebration badge sets could be ordered at the checkouts, that the 40th Anniversary lanyard and the trading pins sold in the store were all behind the registers, and that there was a show logo pin, again at the registers. Announcing to people while they’re waiting in line isn’t the best method for getting the word out and we saw a lot of mentions online after the convention that people missed out on both the badges and logo pin because they never heard about them or thought to ask.

To alleviate store waits, the Celebration Store could have easily had satellite locations selling t-shirts, lanyards, and other smaller items scattered throughout the exhibit hall. The same could have been done with the official Celebration poster. Since the artist, Paul Shipper, was available for autographs, why not make it a part of Artist Alley or give him his own booth where posters could have been sold throughout the weekend and he’d have a dedicated area to sign.

With Star Wars Authentics taking over the autograph hall there were bound to be some growing pains but some of the issues were very avoidable.

Let’s start with the signing times and online schedule. It wasn’t released until about a week before the convention opened. We understand that was by necessity in that some people were still being announced, but it was more than that. The schedule was posted as a graphic rather than text making it unsearchable. The queue lines were initially alphabetized then changed to numbering about 4 days before the show.

Then there was the fact that some people’s times radically changed between Sunday and Wednesday night sometime. People who thought their schedule for the weekend was set, suddenly changed while they were travelling. It’s possible that some people arrived at Celebration and joined the queue lines for Thursday wristbands thinking their day’s schedule was all planned out only to find when they hit the autograph hall that everything had changed.

On day one, what we encountered in the queue hall didn’t match with what we were told online. The queue lines weren’t numbered on Thursday and the screens which were supposed to tell us not only signing times for the day but which letter was being served, only listed the signer’s name and “group” for most of the time we were there the first day. By Saturday this was corrected with makeshift numbers posted on the curtains by the signers and the TV screens actually listing the queue line for each person and what groups were allowed in. Don’t know about Friday, but that should have been done from the jump.

The Orange County Convention Center is large. Very, very large. Celebration took up a lot of it and used some of it to good effect but not well enough. We understand putting the photo ops and the autographs close together for convenience in moving the signing guests back and forth, but the line management for the two separate sessions could have been separated better. Some fans only wanted one or the other and adding confusion to either area for those lining up should have been avoided.

If Star Wars Authentics will be running the autograph hall at Celebration going forward, they need to take a good look at the feedback and maybe even look at how OfficialPix ran things previously, and come up with a solid plan for their next event.

We actually like that some vendors, Lego and Funko, held lotteries for entry to their stores. It helps with line management and can actually take some of the pressure off attendees if they know they’re guaranteed a slot into a booth to purchase something they may be interested in.

But don’t wait until 3 days before the event to announce who was picked in the lotteries. Maybe the lottery system was added late in the planning necessitating the late reveals but they can be done better in the future.

The same goes for companies like Hasbro and Gentle Giant announcing just prior, or during the event in the case of Gentle Giant, that you need a wristband or a ticket to get into their booths. It’s 2017, social media is huge and the word will get around to convention attendees…you just have to put it out ahead of time.

The list of negatives is actually quite short, even though this article is rather long. The credit card fraud seems to be outside the control of ReedPop, and we added that because it’s something that’s come up in the last week, but there are things that can be fixed. Maybe having Celebration followed a week later by C2E2 in Chicago had an impact on things, but it seemed as though Reed was off their game on some things. They’ve done better in the past and we think they’ll do better in the future.

That future should be in 2019. We’re hoping for a return to Orlando but wherever it is, it should be fun and maybe we’ll see some improvements to the handful of areas that need them.