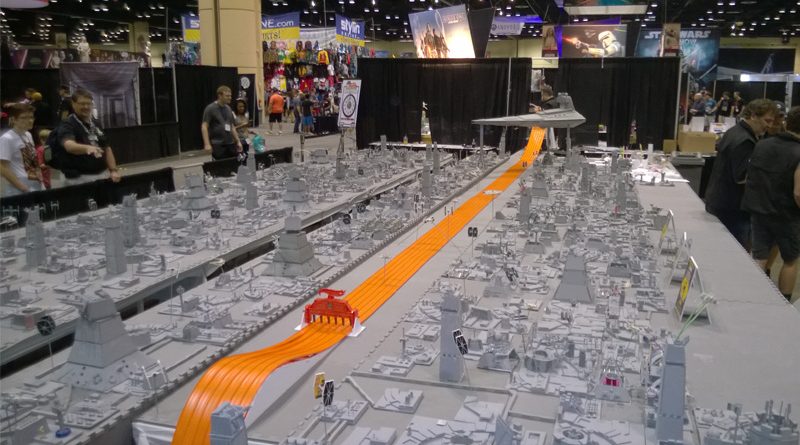 Even though it’s been over a month since Star Wars Celebration Orlando wrapped up, we had one final photo and video dump to post; Frank D’iorio’s Diorama Workshop. For the 15th anniversary, and seventh Celebration, Frank and his team helped fans build Death Star tiles which, when assembled, created a huge diorama of the surface of the Death Star. Cutting through the middle was a 6-lane Hot Wheels racetrack where fans could participate in races during the weekend.

Mattel donated Hot Wheels Star Wars Car Ships for the races and winners could take home their own car. Fans could also go home with the tiles they build as well as exclusive patches, pins and other swag. After admiring the dioramas at every Celebration, I finally participated in the build this year, along with fellow PSWCS members Joe K and Mike D. It was a lot of cutting and gluing but worth it. The final diorama build featured not only the fan-built tiles but also plenty of ships, Lego figures, and other surprise appearances (at least one Dalek was spotted along with the Jettson’s family car and even Harry Potter).

As always, Diorama Workshop created one of the highlights of Celebration. We hope to see Frank and his team back at future events and that fans will make time to participate in the fun projects.