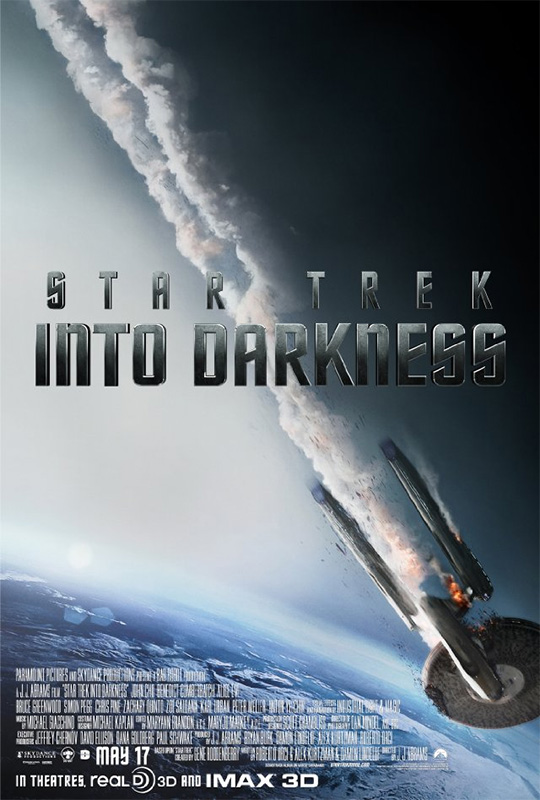 Can you call a movie “Into Darkness” when it has that much lens flare?

Star Trek Into Darkness returns Chris Pine’s Captain Kirk to the command chair of the Enterprise in what turns out to be a new telling of an older, classic Star Trek tale which, if you haven’t read about, won’t be fully explained here.

All of the main cast from 2009’s Star Trek returns for Into Darkness; Zachary Quinto, Zoe Saldana, Karl Urban, Simon Pegg, John Cho and Anton Yelchin can all be found on the bridge while Bruce Greenwood is back as Admiral Pike.  Joining the fun; Alice Eve as Carol, Peter Weller as Admiral Marcus and Benedict Cumberbatch as John Harrison.

While the main story of Into Darkness revolves around the crew of the Enterprise trying to stop a terrorist who has blown up a Starfleet base, there’s a more personal story surrounding Kirk, who finally needs to face the reality of sitting in the Captain’s chair.  He believes that the rules don’t apply to him, that his intelligence, his daring and his sense of loyalty to his crew and his friends will allow him to always win the unwinnable situation, no matter how much he tramples the Prime Directive or dismisses his orders or  how much danger he places himself in.

So what happens when he meets a villain that is also willing to do what it takes to protect his people, to take any risk necessary to dispatch those he feels beneath him or who, at any given time may, in fact, be the smartest, strongest man in the room?

As far as necessary.

Into Darkness, like its 2009 predecessor, is full of action, outrageous stunts and plenty of humor.  There are nods to the classic Trek television show and previous films and while we’re still living in the new timeline created by J.J. Abrams, it’s familiar, comfortable and yet still interesting to watch.

The film does have a few issues; as a friend pointed out, there are a few places where certain things happen in the plot only to put the characters in a specific situation for some over the top action or to force a character to make a certain decision.  But the payoff is usually worth it.

The acting is mostly solid with everyone bringing their A game, but the seriousness in a few scenes does bring out some overacting.  Hey, it’s not like William Shatner didn’t do that a time or 10.

Star Trek Into Darkness looks incredible, whether it’s on a practical set, an alien planet or just a look around futuristic versions of London and San Francisco.  I did not see the movie in 3D but there are a few scenes where I’m sure it would have looked exceptional.  I think I’d still recommend seeing it in 2D because, ultimately, you want to see this movie for the story as much as the visuals.

At the end of the day, Star Trek Into Darkness is a classic Trek story, reimagined to fit in the new reality created by J.J. Abrams and his team of writers.  It’s fast paced, has lots of action, a little classic Trek science and ultimately pays off with an enjoyable movie, satisfying ending and open possibilities for future movies.

I’ll give Star Trek Into Darkness 4.5 wheels of cheddar out of five.