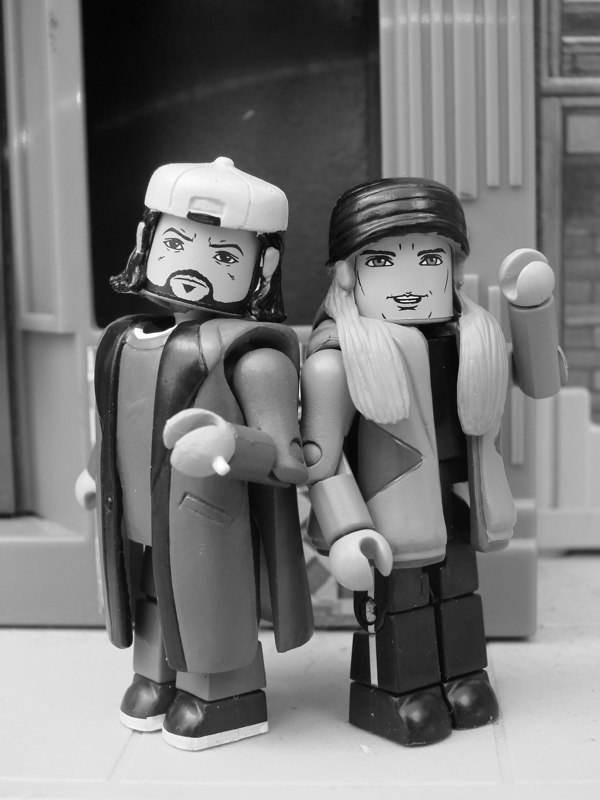 Diamond Select is debuting a new line of Minimates figures based on the films of Kevin Smith.  The first release will be a black and white 2-pack of Jay and Silent Bob from their appearance in Smith’s first film, Clerks.

Plans call for both black and white and color versions of future packs and will cover not just Clerks but also Clerks II, Mallrats, Chasing Amy and Jay and Silent Bob Strike Back!

When a new Minimates toy line is born, it’s a special time for everybody. So Diamond Select Toys is going to give birth at the most special time of all! A new line of Minimates is debuting at this year’s Comic-Con International in San Diego, and it’s from the cinematic world of Kevin Smith!

The first exclusive two-pack includes Jay and Silent Bob in black-and-white, just as they appeared in Smith’s groundbreaking debut film, Clerks. Future sets will be in black and white as well as full-color, and will be based on all of the View Askew universe films: Clerks, Mallrats, Chasing Amy, Clerks 2 and Jay and Silent Bob Strike Back! Each Minimate mini-figure stands approximately 2 inches tall, with interchangeable parts and accessories.

The set will be available at the Diamond Select Toys booth, #2607, at a price of $10. Comic-Con International runs from Thursday, July 18 to Sunday July 21, with a Preview night on Wednesday.