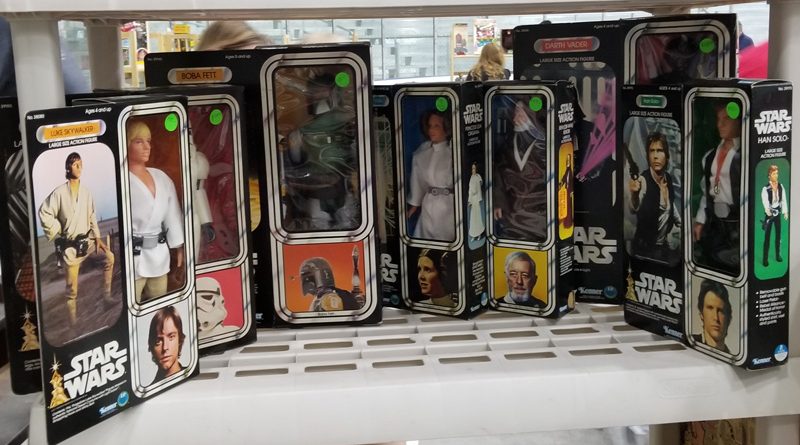 Yesterday we attended the Rochester Collectible and Vintage Toy Show in Rochester, NY. It’s a smaller show but had some excellent sellers with items ranging from tin and pressed steel cars and boats to early cereal promotions to Star Wars and Hot Wheels.

On the vintage side, there were several booths that had both loose and carded/boxed Star Wars toys including a Shuttle, boxed 12″ figures, carded AT-AT Driver, Boba Fett, Luke Skywalker, and others. Plenty of loose figures such as Yak Face and Blue Snaggletooth, Amanaman and Droids.

There weren’t a lot of G.I. Joe figures but we found a couple 12″ figures from the 60s and 70s, and at least two booths had some loose 80s Real American Heroes action figures. There were a handful of carded figures including early Snake Eyes and Flash figures. One item that stands out, and one we don’t recall having seen before, was a G.I. Joe Electric Trucking set.

Some of the interesting items were Mattel’s Man in Space Space Station, Marx playsets and one seller that had a display case full of vintage Cracker Jack toys, which we somehow forgot to take a photo of. We were impressed with the amount of older tin and pressed steel toys, some which were simple cars and trucks while others, like the wind-up boat in the slideshow, were intricately detailed with lots of moving parts and features.

It was a fun show and if you’re in the area, we think it’s worth checking out. You can find the show on Facebook.