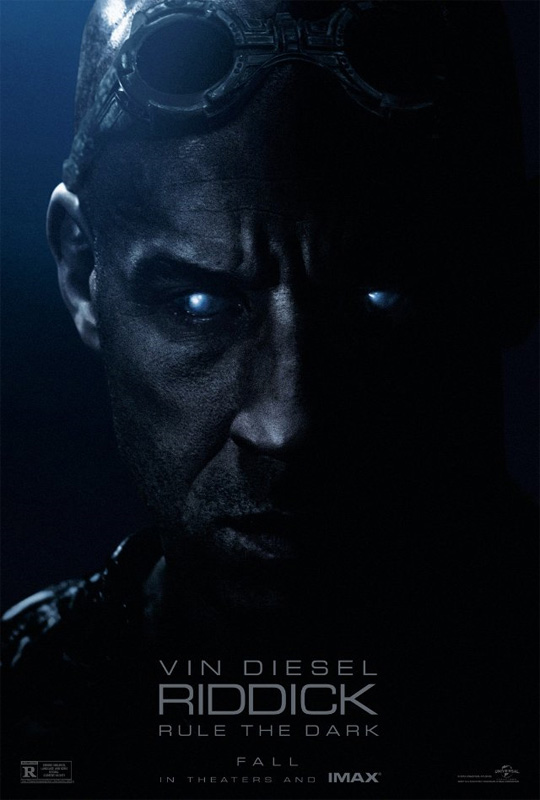 Riddick returns Vin Diesel’s title character to the basics of what made Pitch Black, the first movie in this series, such a cult favorite without ignoring the continuity laid out in 2004’s The Chronicles of Riddick.

The movie opens with Riddick alone and left for dead on a desolate, unnamed planet.  Told via flashback, which includes a cameo by Karl Urban as Vaako, we learn that Riddick visited the planet believing it was his home world, Furya.  Instead, it was a trap laid by Vaako to kill Riddick so that he could take command of the Necromongers.

Gravely wounded, Riddick realizes that he’s lost his edge and that he’ll need to find it again to survive the hostile environment, which includes several types of deadly creatures.  Since this isn’t that short of a movie, I’m not giving anything away saying that Riddick accomplishes his goal of living.  That includes learning to defeat a poisonous, water dwelling creature and taming a wild dog-like animal.  About a year passes when Riddick finds an unmanned mercenary outpost and devises a plan to escape the planet.

He sets things in motion by activating an emergency beacon which is answered by two mercenary crews.  One, led by Jordi Molla as Santana, is there for the bounty on Riddick’s head (pays double to bring him in dead) while the other, led by Matt Nable’s Boss Johns, is there for a more personal reason.  Johns wants to capture Riddick so he can find out what happened to his son, William Johns (Cole Hauser), who didn’t survive his own encounter with Riddick during the events of Pitch Black.

At this point in the movie we return to what helped Black become such a fan favorite.  Riddick disappears into the background, showing up only in glimpses as he turns the two mercenary crews against each other and, eventually, against the deadly creatures on the planet.

Riddick turns up the blood and gore a little bit from the previous films, but there’s also some humor injected by both Riddick and the mercenaries that helps to even things out.  Katee Sackhoff as Dahl and Bokeem Woodbine as Moss make up part of Johns’ crew while Dave Bautista as Diaz and Nolan Gerard Funk as Luna are signed on with Santana.

David Twohy returns as director and writer but had some help with the screenplay by Oliver Butcher and Stephen Cornwell.  Vin Diesel once again receives producer credits on the film, but more importantly, he owns the rights to the character of Riddick.  It was recently reported that he obtained the rights in exchange for his cameo in The Fast and the Furious: Tokyo Drift.  That ownership and his love for the character, plus support from Twohy, is what allowed this sequel to go forward after the lackluster box office Chronicles pulled in.  If Riddick does well, apparently there are plans for possibly another two films.  Can I pre-order tickets now?

Riddick borrows a few plot points from Pitch Black, but it’s not a copy and has its own payoff.  Riddick, as a character, is advanced in the movie and in some ways brings out a better performance in Diesel than his role as Dominic Toretto in the Fast and Furious movies.  I’m a huge fan of Katee Sackhoff and enjoyed her part as Dahl, including the cameo by her boobs.  Dahl is a take-no-shit merc and you never once question if she can hold her own even against guys the size of Diaz and Moss.  Santana is creepy and cocky, giving us a bad guy we can get behind seeing wasted.  Johns has a certain amount of honor and we’re left right to the end of the movie wondering whose side he’ll end up on.

The budget for Riddick, estimated to be about $38 million, was scaled back from Chronicles but the movie looks excellent.  The environment and creatures mostly work together seamlessly.  There are a couple of times with the hover bikes where the CGI was a little sketchy, but for the most part there’s nothing that really pulls you out of the film.  The plot is also pretty straight forward, shedding a lot of the mystical stuff from Chronicles, but leaves enough meat to build characters while providing plenty of action.

If you liked Pitch Black or are just a fan of Vin Diesel, or Katee’s nipples, I’d recommend checking this movie out at the theater, especially if that means future installments.  I’m going to deduct a point for the similarities to Pitch Black, a couple FX missteps and one plot hole that I didn’t care for even though it’s there specifically to explain one part of the story.  Four out of Five wheels of cheddar for Riddick.