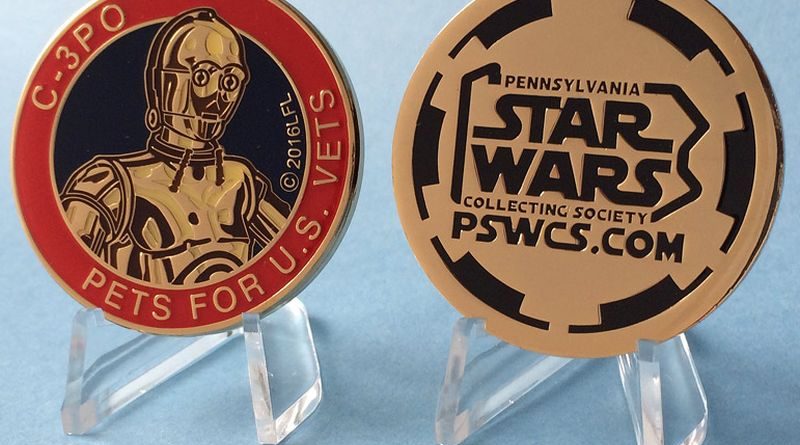 PSWCS.org is selling a C-3PO medallion to raise funds for Pets for U.S. Vets and now they’re offering international shipping. The C-3PO medallions are priced at $12.50 each, shipped, in the U.S.  International shipping will be higher, calculated by PayPal during checkout, with orders for multiple medallions evening the shipping out.  The full press release can be seen below.  You can order your medallion from the PSWCS.org website.

PSWCS.org and the Pennsylvania Star Wars Collecting Society have joined forces with Pets for U.S. Vets, a program of the Washington Area Humane Society in Washington, PA, to sell a C-3PO medallion to raise money for their ongoing mission of providing pets, free of charge, to military veterans.  All animals are spayed or neutered, up-to-date on vaccinations, and micro-chipped.

To raise funds for Pets for U.S. Vets, PSWCS.org is selling a limited run of 1,000 medallions featuring C-3PO.  This is the sixth medallion and charity that PSWCS.org has partnered with.

Each medallion has been cast in gold toned metal and features C-3PO on the front along with the date and name of the charity, Pets for U.S. Vets.  The back has the PSWCS logo.

The medallions are sold online for $12.50 each, including shipping within the US, and are now available for shipping to international addresses.  International shipping will be calculated by PayPal at the time of checkout.  International buyers are responsible for any applicable import or customs fees.

The C-3PO medallions are fully approved by Lucasfilm and will be accompanied by a Certificate of Authenticity and receipt as they are tax deductible.  Medallions are on sale now with over 300 already sold. Order yours today at http://www.pswcs.com/charity.cfm.