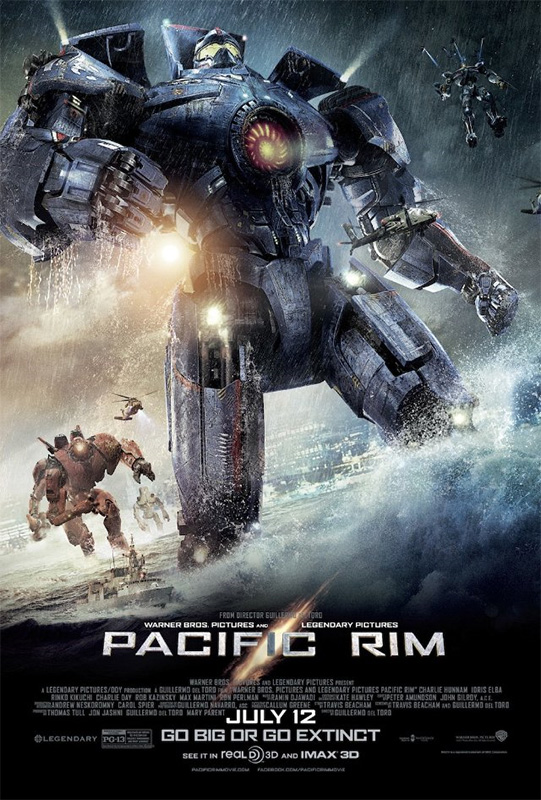 Guillermo del Toro’s monsters vs machines film is an ode to Japanese anime and cinema, where films such as Godzilla and Mobile Suit Gundam have been staples for decades.  This time around, the giant monsters, or Kaiju, appear in the Pacific from an interdimensional portal at the bottom of the ocean.  To combat these aliens, the world has gotten together to create the Jaeger program, constructing giant, piloted mechs to protect the world.

Because the mechs are so complex, it takes two pilots, mind-linked through a process called drifting, to operate them.  Charlie Hunnam, as Raleigh Becket, and his brother Yancy (Diego Klattenhoff) are two of the best pilots, using their Jaeger, Gipsy Danger, to defend Alaska.  But after a battle goes wrong, and Yancy is killed, Raleigh leaves the Jaeger program.

Five years later, with the attacks becoming more frequent and the Kaiju larger, Raleigh is called back to action by his former boss, Stacker Pentecost (Idris Elba).  There’s a plan to seal the portal in the Pacific and finally bring peace to the planet.  Of course, this being a movie, things don’t go exactly as planned.  Pentecost learns from two scientists, Charlie Day’s Newton Geiszler and Burn Gorman’s Gottleib, that the attacks aren’t random and are actually planned out by aliens who are intent on taking over the planet.

Their discoveries help Pentecost and Raleigh, with his new copilot Mako (Rinko Kikuchi), make their final assault on the portal where they face the largest Kaiju yet to invade.

Pacific Rim starts out with flashback scenes and narration by Raleigh, giving the viewers a history lesson on how we got to the point in time of the film.  The action sequences kick into high gear right from the jump and it only slows down a few times to introduce characters such as Mako and the scientists.

Ron Perlman as Hannibal Chau, a black market dealer in Kaiju body parts, has several funny moments with Newton that help break up the battles.  Max Martini and Robert Kazinsky, as Herc and Chuck Hansen, play the rule obeying poster boys for the Jaeger project.

I’ve given del Toro crap before for using similar creature designs in his films (notably Pans’ Labyrinth and Hellboy II: The Golden Army) but Pacific Rim has some unique designs along with a few that are reminiscent of the classic man-in-a-suit Godzilla movies.  The CGI in the movie is seamless and it looks gorgeous, especially considering the amount of water effects used.  Industrial Light & Magic has proven their mastery of CGI liquids numerous times and their expertise was appreciated.

The plot of Pacific Rim doesn’t stray very far from your standard hero’s tale of redemption but I didn’t find that to be a problem.  Much like Avatar, this movie is more about the spectacle of the world the director wanted to create then it is the story; you go to see Pacific Rim to watch gigantic mechs beat up on monsters and that’s exactly what was delivered.

Hunnam and Elba, who carried most of the film, did fine in the acting category with Hunnam falling a little flat.  Part of that may be that I couldn’t get his turn as Jax Teller from “Son’s of Anarchy” out of my head.  Elba, however, is very talented and he played Pentecost with the appropriate amount of swagger.  Martini’s fake Australian accent was a little odd but it was just nice to see him not be the bad guy.  The comedy turns by Day and Perlman created some of my favorite moments in the movie.  Besides, how can you have a del Toro movie without Ron Perlman?  Hint; you can’t.

As I said, the CGI was seamless in Pacific Rim, the mechs all had unique looks to them and the monsters fit the bill for giant battle scenes.  Since the movie relied so heavily on CGI, I did expect to see a little more indulgence in the actual fights between the Jaegers and Kaiju and, for the most part did, but there were a few times where the action was so frenetic that it was hard to tell what was going on.  Several of the large battles took place at night or under water which added to the confusion, but they didn’t miss a beat in taking out buildings, bridges and all the other man-made objects you’ll find in major cities such as Hong Kong.

Unlike Man of Steel, which I held to a higher standard, the destruction and over the top action was exactly what was called for in Pacific Rim.  The story was pretty straight forward and the plotting kept you in the loop for the whole 2 hours.  Unlike the recent Star Trek and Iron Man movies, or Transformers, this movie’s logic held together rather well and from that standpoint, may have been better overall.  Pacific Rim is not really like anything else we’ve seen in the US movie market before and for that I commend Guillermo del Toro for getting this made.

I highly recommend Pacific Rim to anyone that likes the big action films.  It’s a spectacle that should be seen on the big screen but not necessarily in 3D.  I’m slicing up 4 wheels of cheddar out of 5.