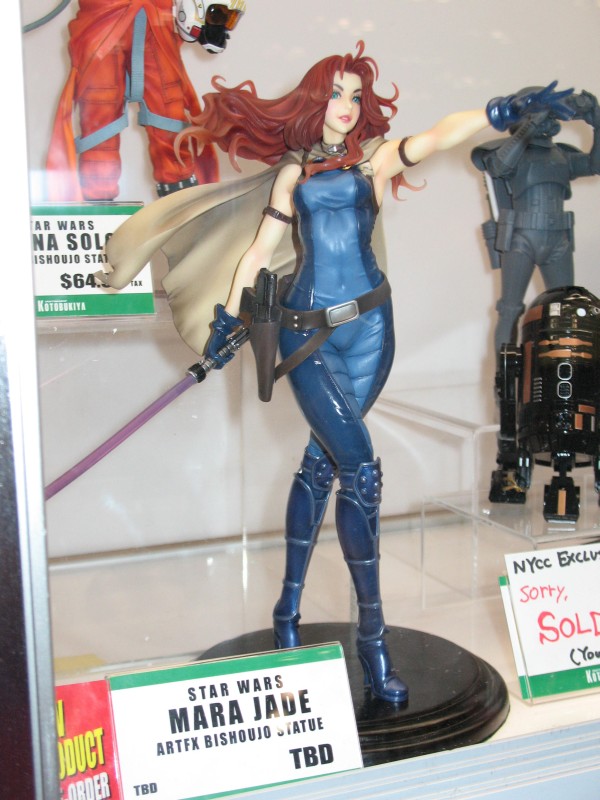 Kotobukiya covers a lot of licensed property from comics to video games to anime to movies.  Two of their more popular lines are the Bishoujo and ArtFX+ statues and the highlight for us were the upcoming Mara Jade and General Grievous releases.

Mara Jade was being shown off for the first time this weekend and she looks brilliant.  She’ll join Jaina Solo as the second Star Wars Bishoujo release.

There were a few newly announced statues including Jubilee (card art only), Spider-Woman (prototype) and Jun Kazama (prototype) in the Bishoujo line while there several new Marvel Now! Avengers figures on the way.

Halo is a newly announced license but all we saw was a card promising a release for Fall 2014.

Besides the ArtFX+ and Bishoujo lines, the silicone ice trays are also becoming very popular.  We’ve seen the R2-D2, Death Star and Han in Carbonite trays before but this weekend Koto also had the Boba Fett tray in the case.  Unlike the other trays that have several of the same design, the Boba Fett tray has his iconic helmet along with the Bantha emblem that’s become synonymous with Bounty Hunters in the Star Wars universe.

Kotobukiya offered an exclusive R2-Q5 ArtFX+ release for New York Comic Con but if you didn’t get your pre-order in before the show started, or jump early, you were out of luck.  The droid was sold out by Saturday.

If you’re interested in statues but don’t have the cash to go with the larger Sideshow type offerings, we’d suggest looking into Kotobukiya.