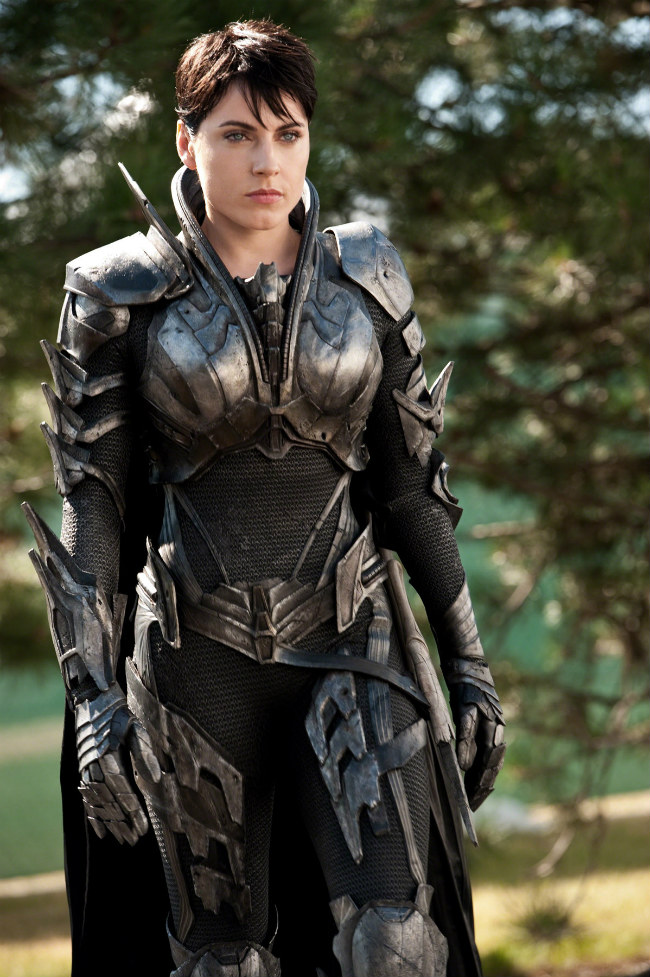 When you go to see a Superman movie and you come home thinking that the most interesting character was Antje Traue’s Faora, something’s wrong.  Not with Antje, cuz she’s hot, look at her, but with the movie.

Christopher Nolan and David S. Goyer are responsible for the story and screenplay respectively.  Zack Snyder directed.  Man of Steel is a true reboot of the Superman franchise and follows on the heals of Nolan and Goyer’s successful Batman trilogy.  Unfortunately for DC, this movie fell short in a lot of respects.

The basic story is pretty solid; in the last days of Krypton, Jor-El (Russell Crowe) sends his son Kal-El (Henry Cavill) to Earth to escape the planet’s destruction.  General Zod (Michael Shannon), after a failed coup attempt, is banished to the Phantom Zone only to later escape and track Kal-El to Earth seeking revenge and to build a new Krypton on Earth.

Executing that basic story, however, turned into a hot mess of CGI destruction for the sake of destruction.  And yelling.  There was a lot of yelling.  And there was a whole Hulk -smash-puny-god riff.  And Superman punched a lot of stuff…with his fists and his face and the back of his head and he got tossed through a city and a town and space ship and stuff.

Wholly crap was it bad.  The final showdown between Superman and Zod was also a real what the fuck moment.  The outcome basically goes against everything you’ve ever known about Superman.

Amy Adams.  Almost forgot about her, she was Lois Lane.  I didn’t like her.  Wonder what Kate Bosworth was up to?  Jimmy Olsen wasn’t in this movie.  There is a girl named Jenny (Rebecca Buller) that I guess we were supposed to care about when Perry White (Laurence Fishburne) and Steve Lombard (Michael Kelly) almost died rescuing her.  Maybe she was supposed to be the Jimmy character?   Don’t know, had to look her up on IMDB to even find out her characters name so she probably wasn’t that important.

Diane Lane looked really old in the makeup she wore to play present day Martha Kent.  Kevin Costner, as Johnathan Kent, just looked old through the whole thing.  I don’t know if that was intentional.

Is this review making any sense or is it jumping around with me randomly inserting things as they pop into my head?  If it makes sense, you’ll like Man of Steel.  If it feels random and you’re confused, that’s how I felt about the movie.  Two wheels of cheddar out of five.

I should have gone to see Fast & Furious 6 again.  Or watched Pandorum on disc, because Antje Traue’s hot.