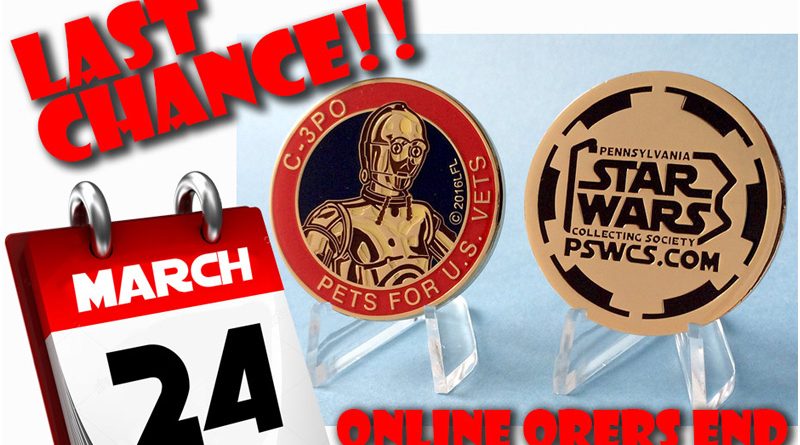 This is your last chance to order your Pets for U.S. Vets C-3PO charity medallion online.  In just 17 days, on March 24, 2017, online orders will come to an end and any remaining medallions will be sold exclusively at Star Wars Celebration Orlando from April 13-16, 2017.

Since launching our fundraiser in May 2016, we have received tremendous support which will help deserving pets and veterans. Now we’re in our final push to sell the remaining C-3PO medallions. Any remaining medallions after March 24th will be available at Celebration Orlando where we expect to sell out.

If you won’t be at Celebration, this may be the final chance to buy your C-3PO medallion and help a worthy cause, placing a pet, free of charge, in a forever home with a military veteran.

The C-3PO medallion is limited to an edition of 1,000 pieces.  This is the sixth medallion and charity that PSWCS.org has partnered with.

Each medallion has been cast in gold toned metal and features C-3PO on the front along with the date and name of the charity, Pets for U.S. Vets.  The back has the PSWCS logo.

The C-3PO medallions are fully approved by Lucasfilm and will be accompanied by a Certificate of Authenticity and receipt as they are tax deductible.  Medallions are on sale now. Order yours before they sell out by visiting http://www.pswcs.com/charity.cfm.