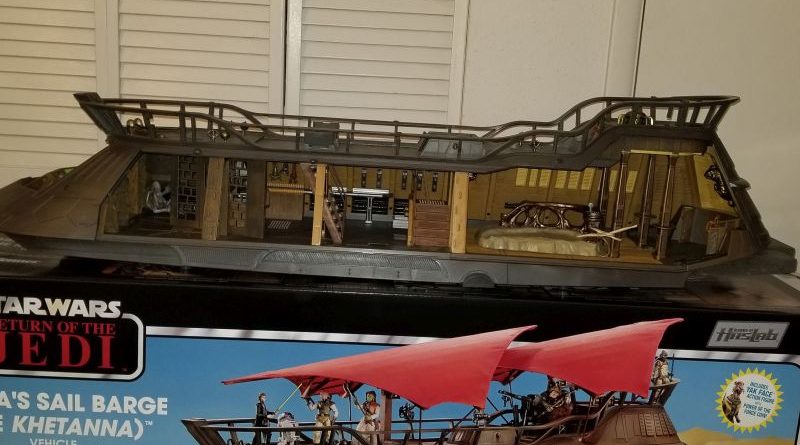 Last year when Hasbro announced their crowdfunded Jabba’s Sail Barge during New York Toy Fair, it became the talk of the collecting world as to whether it would fund, would it be worth it, and would the vision by designer Mark Boudreaux translate into the final product. The answer to all those questions is “yes.”

Jabba’s Sail Barge, the Khetanna, is now arriving to the 8810 backers of HasLab’s inaugural product and while there have been a few glitches, the final result exceeds our expectations. FedEx delivered our Barge yesterday and while we knew that the box would be over five feet long, it was still a shock to see it standing next to the approximately 5’7″ driver asking for a signature.

The Barge itself is inside an art box which is then put inside two additional shipper boxes for protection. We had a few dings in the outer box, none of which transferred to the inner shipper or the art box and once we got to the core, the Barge was in excellent condition with no broken or missing parts that we could find. The interior of the Barge is pre-assembled leaving a handful of parts on the exterior to be assembled. We didn’t install the sails or deck cannons on our Barge since, for now, it needs to remain in storage.

One of the first noticeable things about the Barge is the plastic that’s used. It’s a harder plastic than many of the more recent vehicles produced by Hasbro. We’re uncertain why, if it was for the structural integrity, for how it would take the sculpt details, or possibly accepting the huge number of paint operations that went into the detailing. Whatever the reason, that also played a role in why we didn’t assemble everything. We didn’t want to risk breaking any pegs disassembling the ship to put it back into the box.

However, because the inside detail is already in place, it’s still an impressive toy to see. There are five removable panels along the left side, including the panel over the cockpit. They allow access to the cockpit, jail cell, kitchen, and Jabba’s lounge room. The top deck has a trap door that drops into the jail and three opening hatches that access ladders or stairs inside to give you multiple display options for your action figures. There’s even an open door from the cockpit to the main space of the Barge which means action figures can “walk” the entire length of the ship or use the ladders to the deck as if this were a real, working vessel.

The cockpit has seating for two pilots with display screens showing other areas of the ship as well as the sarlacc. The jail cell, with opening door, has an Ithorian prisoner in chains that’s been long forgotten. The kitchen has a sink and food for the guests hanging on the wall ready for prep, there’s an armory with axes mounted on the walls and storage for your figure’s accessories, and then Jabba’s lounge at the back. Included in the lounge are artwork pieces mounted to the walls along with Jabba’s dais and room for his guests and entertainment.

The paint applications throughout are incredible. Hasbro hasn’t said how many went into it but believe they hinted at nearly 1,000. All of the details on the food and weapons are painted separately, the mounted art is painted, and there is weathering detail on the flooring. The outside has weathering detail as well. The opening deck panels are separate colors as is the ladder at the back of the Barge. There are a few accessories on the deck, including piping and other details that come pre-assembled and have unique coloring to add to the overall look.

Jabba’s Barge without Jabba wouldn’t be complete so Hasbro included a figure which is quite well done. It’s a repaint that works well although the eyes are a little big and very red. The figure has articulation in the arms but not in his tail. During the course of the crowdfunding, Hasbro added two perks; a book on the making of the Barge and a carded Yak Face Vintage Collection figure. The book was shipped out last year after the Barge reached its funding goal but Yak Face was packed in with the Barge. We didn’t take a photo of the figure but it comes on a Power of the Force card back with a coin, mimicking the vintage Kenner figure as it was released in Canada.

HasLab’s funding goal was 5,000 backers at $500 each. Sales tax was added at the end, but the $500 investment included the Barge, Jabba, Yak Face, the concept book, and shipping to all US backers. The original program was open only to US and Canada but since then, Hasbro has worked out a deal with eBay to sell Jabba’s Sail Barge to other customers around the world, including Europe and Australia. At New York Toy Fair this year, Hasbro didn’t put an exact number on the production of the Barge but said that it was under 10,000. That includes the 8810 for the original backers and an allotment for non US fans and collectors.

Jabba’s Sail Barge is the largest toy produced for the Star Wars line by either Kenner or Hasbro. While it’s not a 7-foot long USS Flagg from Hasbro’s 1985 G.I. Joe line, it still rings in as one of the largest toys for any line we can think of. The love and care that Mark Boudreaux put into the design is just another feather in the cap of his amazing career at Hasbro. Our verdict is that Jabba’s Sail Barge is well worth the original price and the wait for it to arrive. It will easily make a centerpiece for any Star Wars collection.