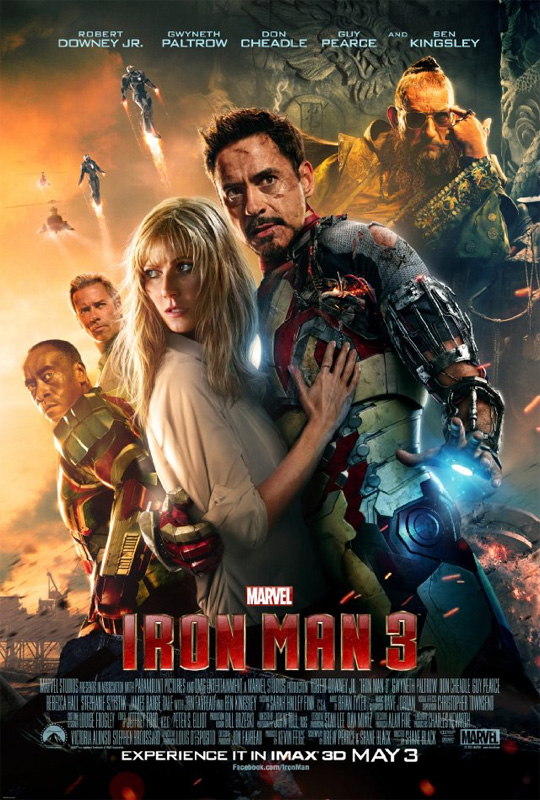 I have a tendency to run off on movie reviews, either picking apart a film or getting too detailed and kinda spoilerish.  I’m not doing that this time because everyone needs to go see Iron Man 3 and no matter what I can, will or won’t say here, that’s a fact that can not be argued.

Iron Man 3 is not its predecessors.  It has a different feel to it, thanks to Shane Black’s directorial hand, no doubt, but at the core it’s still Robert Downey Jr. playing Tony Stark with all the humor and brilliance that you’ve seen through three movies (Counting The Avengers).

Don Cheadle and Gwyneth Paltrow are back as James Rhodes and Pepper Potts respectively, Jon Favreau has a cameo as Happy Hogan and Guy Pearce, Ben Kingsley, Rebecca Hall and James Badge Dale join in and may or may not be the antagonists.  One of the fun additions to the film was Ty Simpkins as Harley Keener, Stark’s young helper.

Unlike the first two films in the trilogy, we don’t see a lot of Iron Man for large chunks of the film.  Iron Man 3 pits Tony Stark, the man, against an enemy who is not only targeting the United States and his closest friends, but also him personally.  It’s also a story about Stark dealing with some leftover demons from his encounter with the aliens during the invasion in The Avengers.

But even with all the attacks going on, the humor that this franchise has become known for is there, even after the credits.  So hang around, there’s an excellent cameo at the end that you can’t miss.

I would recommend skipping the 3D showings of Iron Man 3, there’s not one point in the movie where I thought that added anything to the experience and the only reason I saw it that way was because it was originally the only option for my theater for tonight.  Other than that, the movie looked excellent, the acting was spot on and there were some twists that I never saw coming…although there was one telegraphed early just due to casting.

Even without Iron Man, the film is full of action from beginning to end and everyone gets in on that from Stark to Rhodes to Happy and even Pepper.  The FX in the film were well done as always, and the sheer number of armor versions that have cameos in the film will blow you away.

Iron Man 3 advanced the story of Tony Stark and while it did fit in well with the previous Iron Man movies, there wasn’t as much of a tie in to Phase 2, as it’s called, of the Avengers universe.  But that’s fine.  We still have Thor, Captain America and Guardians of the Galaxy films to get through before we get back there anyway.

Other than skipping 3D, I can’t recommend this movie enough.  It’s a fun an interesting story and it’s driven by Robert Downey Jr. as Tony Stark…armor optional.  Five wheels of cheddar out of five.  Now, bring on the Thunder!