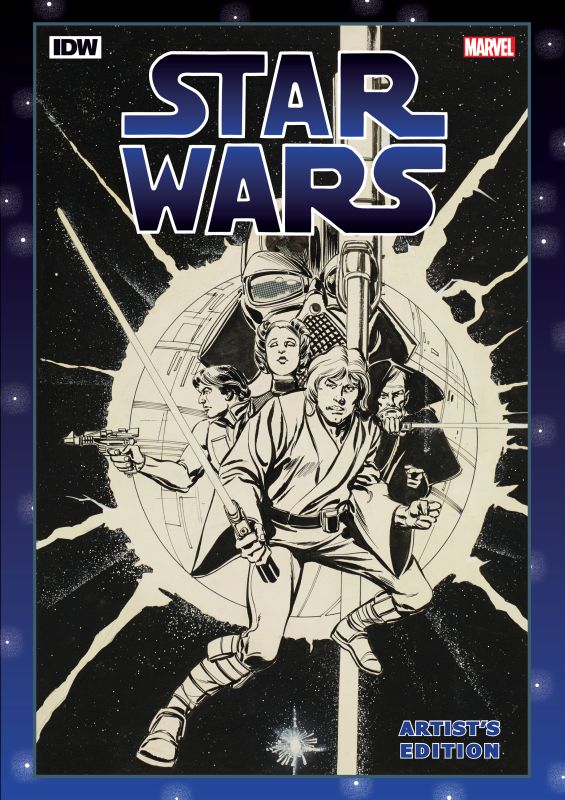 IDW is partnering with Marvel to release a new Artist’s Edition based on Marvel’s Star Wars run of comics.  If you’ve never seen an IDW Artist’s Edition book in person, they’re quite impressive.  The large size books, as mentioned in the press release below, feature scanned images of the original art pages or covers as done by the artist.  You can see where corrections or notes were made on a story before it was finished and printed for release.

We had the opportunity to see the Walter Simonson “Manhunter” and “Marvel Covers” books at New York Comic Con last year and are very excited to see what IDW includes in this new Star Wars book.  The full press release is below.

San Diego, CA (May the 4th Be With You, 2015) – IDW Publishing and Marvel are proud to announce that they will expand their relationship once again… this time in a galaxy far, far away!

Ever since Star Wars took the world by storm in 1977, comic books have been an integral part of building its massive mythology. Now IDW Publishing is bringing Marvel’s wildly successful run of Star Wars comics to two unique formats that IDW pioneered.

“Marvel has been a terrific and loyal partner, and Star Wars represents an incredible opportunity to further expand our relationship,” said IDW President and COO Greg Goldstein.

IDW Publishing’s award-winning Artist’s Edition line presents complete stories with each page scanned and printed directly from the actual original comic book art at full size. While appearing to be in black & white, each page has been scanned in color to mimic as closely as possible the experience of viewing the actual original art—affording readers the opportunity to see blue pencils in the art, editorial notes, art corrections, etc.

This amazing and unique line has previously featured some of Marvel’s most beloved characters and creators, like Walter Simonson’s The Mighty Thor, John Romita’s The Amazing Spider-Man, and David Mazzucchelli’s Daredevil Born Again. In late fall of 2015, IDW and Marvel will team up once again to add Marvel’s Star Wars creators to this already illustrious list.

“Since the inception of our Artist’s Edition program, we’ve had Star Wars on our wish list,” said Goldstein. “During its original nine year run at Marvel, an all-star list of artists provided material for these now classic comic books from the likes of Howard Chaykin, Walter Simonson, Carmine Infantino, Tom Palmer, and of course the legendary Al Williamson, to name a few.”

“The collaboration between IDW and Marvel has produced some of the most immaculate collections of reprinted original comic book material ever to be offered,” says Marvel SVP Sales & Marketing David Gabriel. “Now with the addition of the Marvel Comics’ 1977 Star Wars being gathered in this over-sized format, this collection truly is a pantheon of content that any and all fans of Star Wars will want to get their hands on.”

About Marvel Entertainment
Marvel Entertainment, LLC, a wholly-owned subsidiary of The Walt Disney Company, is one of the world’s most prominent character-based entertainment companies, built on a proven library of more than 8,000 characters featured in a variety of media over seventy-five years.  Marvel utilizes its character franchises in entertainment, licensing and publishing.  For more information visit marvel.com.  © 2015 MARVEL

About IDW Publishing
IDW is an award-winning publisher of comic books, graphic novels and trade paperbacks, based in San Diego, California. Renowned for its diverse catalog of licensed and independent titles, IDW publishes some of the most successful and popular titles in the industry, including: Hasbro’s The TRANSFORMERS, G.I. JOE and MY LITTLE PONY; Disney’s classic characters including Mickey Mouse, Donald Duck, and Uncle Scrooge; Paramount/CBS’s Star Trek; Nickelodeon’s Teenage Mutant Ninja Turtles; Zombies vs Robots by Chris Ryall and Ashley Wood; Ragnarök from Eisner Award-winner Walter Simonson; and Little Nemo from the award-winning duo of Eric Shanower and Gabriel Rodriguez. IDW is also home to acclaimed imprints such as the Library of American Comics, which publishes classic comic reprints, Yoe! Books, a partnership with Yoe! Studio, IDW Artist’s Editions, and Top Shelf Productions.

IDW’s critically- and fan-acclaimed series are continually moving into new mediums. Currently, Jerry Bruckheimer Films and Disney are creating a feature film based on World War Robot; Dwayne “The Rock” Johnson and Warner Brothers are producing a film based on Ashley Wood’s Lore; Michael Bay’s Platinum Dunes and Sony are bringing Zombies vs. Robots to film, Alex Kurtzman is producing a movie based on Locke & Key at Universal.

IDW Entertainment was started in 2014 to fund, develop, and oversee brand extensions across IDW Publishing’s portfolio of comics and graphic novels for the global television market. IDW Entertainment is currently in development with a slate of properties for television including the chilling and realistic vampire thriller, V Wars, by New York Times Best Seller Jonathan Maberry with writer/executive producer Tim Schlattmann (Dexter, Smallville); Douglas Adams’ Dirk Gently’s Holistic Detective Agency, with writer/executive producer Max Landis (Chronicle); and many others.