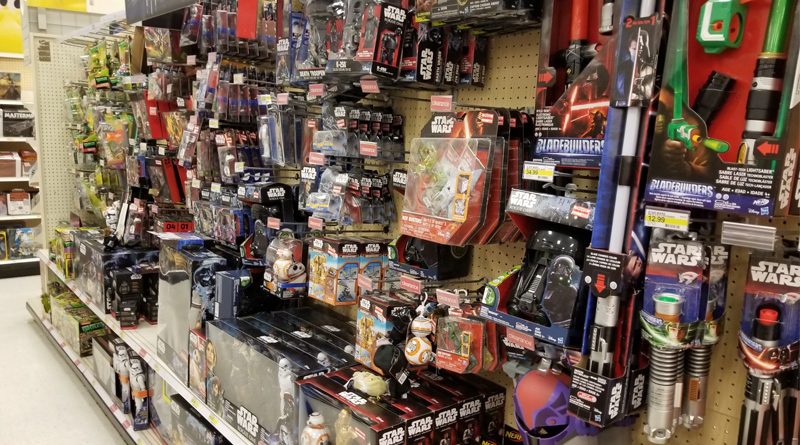 We’re two weeks away from Force Friday II, the launch day for Star Wars: The Last Jedi toys and collectibles, and stores are preparing by discounting older stock and resetting their toy aisles, not just for Star Wars but for all of the new fall toys.

Starting back on July 13th, Target began their big end-of-summer clearance and one of the sections hit the hardest was Star Wars. Nearly everything in the aisle was marked with a clearance tag with the exception of a few exclusives and what remained of Hasbro’s 40th Anniversary releases. What stood out was that some of the merchandise went directly to a 50% discount and included several items, mostly Jakks Pacific Big Figs, that had never been on the shelf at regular price. Figures such as the Scarif Trooper and Imperial Hover Tank Driver suddenly appeared on the shelf for $9.98.

Over the course of the last month, Target dropped prices on all of their clearance items, selling most, but the amount of Star Wars items still on the pegs is significant. The remaining 3.75″ figures dropped to $3.84, the Class I Deluxe vehicles (Rey’s Speeder & Y-Wing) are $12.50, Class I (Ezra’s Speeder, First Order Assault Walker) vehicles are $5.98, and Black Series figures dropped to $4.94.

Even though Force Friday II is not until September 1st, leaks have already occurred and information on the toys has been found in store computers. The first wave of The Last Jedi 3.75″ action figures looks to include 11 characters but only two of them are new. Of the other nine existing characters, seven of them are in outfits that are very similar to those released two years ago for The Force Awakens.

Our concern is that some of the characters being released in two weeks have basically been available for the past two years and it’s taking 50% off, or better, clearance to move them out of stores. What should we expect on the performance of these “new” releases? Will they sell through just because they’re from the new movie and they have fresh packaging? Will we again be subjected to a first wave that clogs up distribution leaving kids and collectors shut out on future releases?

Hasbro’s new Force Link technology, which uses embedded chips in figures and vehicles to interact with a wearable Force Link Band, will add some value to the new releases but it remains to be seen how that helps sales. The huge discounts at Target over the past month are some of the biggest we’ve seen since 2000 when stores were dumping The Phantom Menace toys. We’re concerned that with the huge clearances in stores, specifically Target, and the sameness of several The Last Jedi toys, we could end up with a backlog at retail in the coming months, and possibly another round of clearances in 2018 to clear the product. Both situations would be less than ideal for the future of Star Wars toys at retail.

Here’s a final bit of clearance news, just before posting this article we stopped in Target and found that the Black Series figures had been dropped in price again, to $2.96. We also found the Galactic Heroes Ghost, a $30 toy, for $4.54. That’s an 85% markdown.