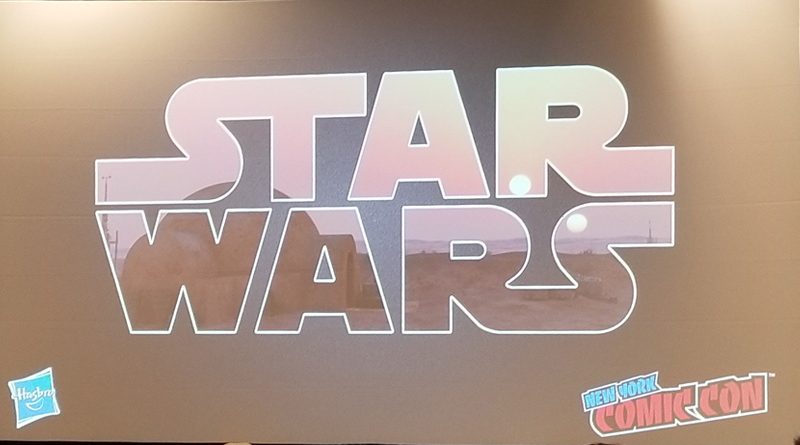 Sunday afternoon during New York Comic Con, Hasbro held a panel to talk about the newly released toys for Triple Force Friday and make a few announcements for upcoming releases. We live-tweeted the panel and the thread with photos can be read on Twitter.

#Hasbro #StarWars panel starting at 1:15 at #NYCC Also follow @swactionnews for a stream of the panel. pic.twitter.com/65YzE9JTnl

If you don’t want to browse over to Twitter, below is a recap of the photos and comments we sent out. A few have been edited for spelling errors.

All of the items that were announced are due by the end of the year. Some were available for online pre-order starting Monday, October 7th and more will be available starting November 1st. There were several questions asked during the Q&A at the end of the panel but we only covered a few of them that we thought would be of the most use, including that there’s no planned end in sight for The Vintage Collection, no new updates on a Black Series Zeb Orrelios, and no final decisions on how packaging will be handled with Hasbro’s zero plastic initiative. It was also asked if there were plans for another HasCon but they had nothing to announce.

It was also mentioned that Hasbro will be attending additional conventions this Fall and some more announcements will be made at those shows. There’s a photo in the slideshow below that lists all of the conventions Hasbro will attend.

One thing to note, when we were tweeting the panel we said that Hasbro was showing us the “new” Rise of Skywalker trailer but the footage shown was the same as was released at D23 and then online. Also, we know now that while Hasbro announced during the panel that The Vintage Collection Yavin Ceremony Leia would be number 150, currently released figures do not have that number. It remains to be seen if this will be corrected or if 150, originally slated to be the Darth Revan repack, will stay open for now.