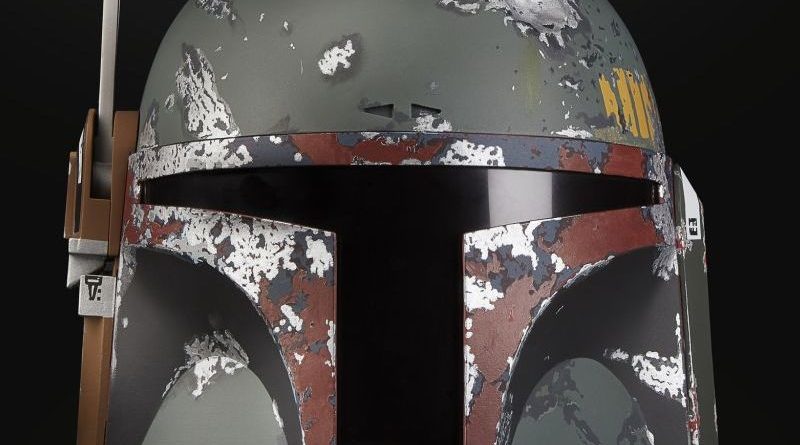 Hasbro held their yearly San Diego Comic-Con panel yesterday and even though it’s a movie year, with an ongoing animated show and upcoming live-action release, the announcements for new product were very limited. Ongoing lines such as Black Series, The Vintage Collection, and Retro Collection will continue later on in the year but nothing new was announced for them.

Arguably the biggest reveal is an upcoming Black Series Boba Fett role play helmet. Incredible detail in the paint and sculpt are enhanced with electronics featured in the adjustable range finder. Like previous releases, the helmet will feature adjustable straps to fit multiple head sizes. Pre-orders will be available at 8:30PM EST today, Saturday, July 20th with an expected release in the Spring of 2020. MSRP on the helmet is $119.99.

Although the Hyperreal Darth Vader figure announced earlier this year isn’t out yet, Hasbro’s working on the next release in the series, Luke Skywalker in his Bespin fatigues. Like Vader, Luke features an internal skeletal structure for articulation, seamless body, and will include a display stand, interchangeable hands and other accessories. Not due until Fall 2020, Luke has an MSRP of $79.99 and will be available for pre-order today.

Finally, the Galaxy of Adventures line will be continuing later this year but it’s moving to a new 5″ scale. The figures will have 24 points of articulation and have action features such as Han Solo drawing his blaster or Chewbacca throwing his enemies. The MSRP will be the same as the current line at $9.99. The first wave includes Han and Chewie along with C-3PO and Darth Vader.

Although it was unveiled earlier in the week, Hasbro also talked about their new Black Series Sith Trooper which debuted at SDCC. The deluxe release included several weapons that likely will not all be included in future retail releases.

Coming on October 4th is Triple Force Friday where Star Wars license holders will release new toys and collectibles for Star Wars: The Rise of Skywalker, The Mandalorian, and Star Wars Jedi: Fallen Order. Nothing new was announced for that event but the D23 convention starts on August 23rd and we know that Lucasfilm will have a large presence this year so some info may be under wraps until then.

Press photos from Hasbro of the new announcements below.