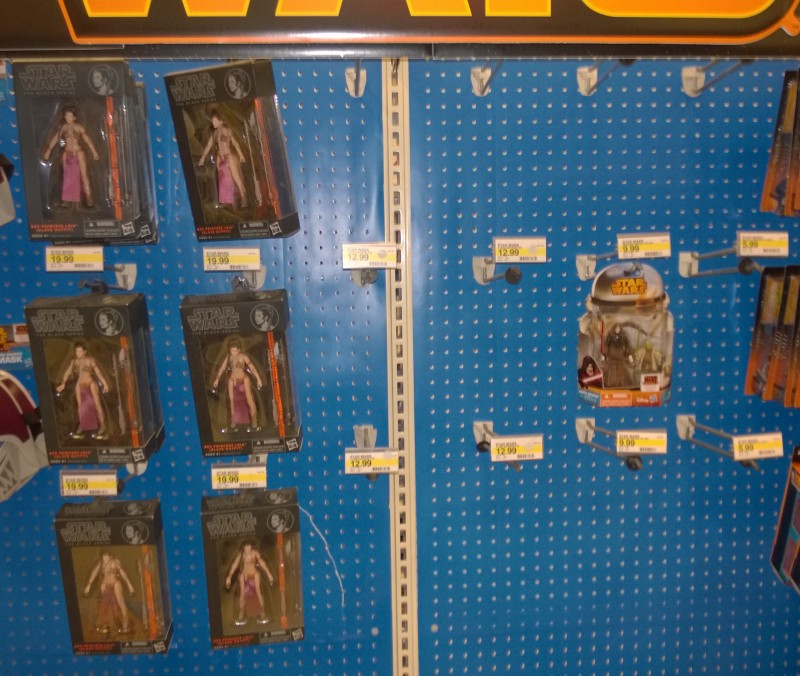 This year’s Hasbro showing at Toy Fair was mostly a disappointment to those collecting Star Wars action figures. For the first time since we began covering Toy Fair, Hasbro didn’t announce any new action figures, of any scale, at their Saturday event.

While there were several 3.75″ Rebels figures, from the Saga Legends and Mission Series lines, on display, and the most recently announced 6″ Black Series figures turned up, there was nothing we hand’t seen previously in either scale. Hasbro didn’t even display the 3.75″ Black Series figures that they debuted in their pre-New York Comic Con event.

It was announced a few weeks ago that there would be nothing from The Force Awakens shown, but it was still believed there would be at least one more wave announced or possibly some store, or convention, exclusives displayed. Instead we were shown the new Furbacca mashup figure, the Bladebuilders lightsaber line and Hero Mashers. New Play-Doh toys were on display as was a new game featuring Chewbacca and the Jedi Force line has been renamed Galactic Heroes, taking the name of its predecessor.

There’s no hard date for The Force Awakens toys to be shown but we have Star Wars Celebration coming up in just under two months and then San Diego Comic Con in July. We had hopes we might hear of a teaser figure coming as an exclusive to SDCC but nothing was announced and, continuing with their plan, Hasbro will not be bringing an exclusive to Celebration.

The lack of news from Toy Fair may not have been as big of a disappointment if Hasbro’s current releases were actually hitting retail. Our local Walmart started their Spring 2015 aisle reset a week ago and it includes two pegs each of Saga Legends and Mission Series while the 6″ Black Series has been relegated to the bottom shelf, sandwiched between knockoff Transformers toys from the Hap-P-Kid Toy Group. Just as in 2014, the 3.75″ Black Series figures will have no shelf space at store 5240 in Upstate NY.

Target, at least, has peg space for Black Series (both scales), Saga Legends and Mission Series as well as shelf tags for the vehicles line that’s supposed to be available. However, as of this writing, there’s one Mission Series 2-pack in stock and six Black Series 6″ Slave Leia figures that have been there since October 2014 (plus three Greedo stocked around Christmas). Target’s new model of breaking cases and shipping figures two or three at a time to retail has left our local store mostly empty for more than six months. They never even received Saga Legends figures for the Christmas shopping season.

So where are the toys at Target?  We know that the shipping situation at the West Coast ports has had some impacts on product reaching stores but according to Hasbro, it’s bigger than that.  The Chinese New Year lands on February 19th this year and many (most?) manufacturing plants close for as much as a month surrounding the holiday, which could impact releases into summer. But where were the toys for the holidays? It seems odd that Target would dedicate so much shelf space to a toy line and then not order enough to fill their stores so does the problems land back on Hasbro?

We can’t explain why Walmart won’t carry Black Series in all of their stores or why Target changed their stocking methods other than, possibly, price. We saw a $3 per figure price bump at Target for the 3.75″ Black Series figures and rumors are that all of retail will eventually see an increase.  Walmart is very price conscious and likes to have less expensive merchandise on the shelves and may be unwilling to buy in to this new MSRP for the Black Series.

Manufacturing costs for 3.75″ figures have definitely gone up even as oil prices, which affect costs of raw materials and shipping, are lower then they have been in 5 years. Much of that has to do with wage increases for manufacturing workers in the Asian market, specifically China. On February 4th, Four Horsemen Studios announced in a blog post that the scale of their upcoming Mythic Legions line will be 6″ instead of 4″ and that “the prices for 6” figures and the prices for 4” figures were very similar.” The more articulation and paint detail that a figure has, the more labor intensive it is to manufacture and those increased wages are having an impact. Will it kill the 3.75″ line? Probably not completely, especially with a large release for a film such as The Force Awakens, but we may see more simplified figures, smaller scales or more of a focus on 6″. For the Marvel toy releases, which have much less history in the 4″ scale, Hasbro went to 2.5″ figures for their Guardians of the Galaxy toys and the upcoming Age of Ultron releases are closer to 3″ but not the highly articulated and detailed 3.75″ we’ve seen previously for Iron Man, Thor and the first Captain America movie.

With as much trouble as Hasbro has had getting their current product to retail, and The Force Awakens rumored for a September toy launch, it’s probably not surprising that we didn’t see any new announcements but not showing even the previously announced toys was a hit. By all accounts Hasbro knocked the ball out of the park on Transformers and Marvel Legends reveals, but that doesn’t lessen the blow to Star Wars fans. We’re hoping that there will be some The Force Awakens reveals at Star Wars Celebration since that is the target audience for what will eventually take over toy aisles later this year, but we’ll have to temper our excitement until then.