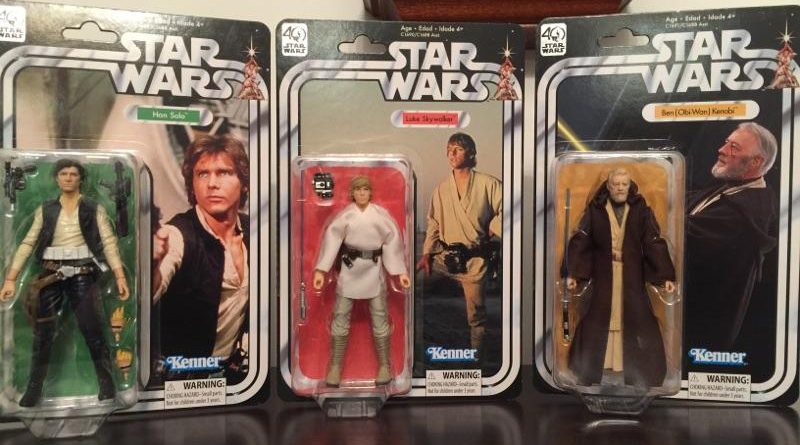 Hasbro officially debuted their 40th Anniversary line of 6″ Black Series figures this past Saturday at their Toy Fair event. At the end of the panel, they announced that the first wave of figures were available for order on their own HasbroToyShop.com website.  Those that placed an order over the weekend began receiving their figures as early as Tuesday.  Our colleague, Joe Kersavage, ordered the first wave and took some photos to show Hasbro’s take on the classic Kenner packaging used to celebrate the 40th birthday of the movies and toy line.

The first wave includes Han Solo, Luke Skywalker, Princess Leia, Obi-Wan Kenobi, and R2-D2.  All five figures have been released in the Black Series line previously, with Leia and Obi-Wan at retail now in the most recent wave.  The carded Leia features an upgraded face sculpt after the wide release version was criticized for not looking like Carrie Fisher, and because it looked less accurate then early prototype photos.  This is Obi-Wan’s third release after the retail version out now and last year’s San Diego Comic-Con exclusive which included additional accessories and collectible packaging.

For those that haven’t been collecting the Black Series since its beginning, this is an excellent opportunity to own R2-D2 and Han Solo, who were released in the first and second waves back in 2013.

The packaging for all of the figures is based on the Kenner cards used in the 70s and 80s with the Star Wars logo, racetrack border, and photo from the movie.  The card back for all of the figures is the same and includes individual photos of all 12 of the figures that will be released at retail for the 40th Anniversary.  There’s also a picture of the 40th Anniversary Legacy Pack that includes Darth Vader and a display stand for the action figures.  The Legacy Pack includes a 2-sided cardboard backdrop with the stand to give collectors options for highlighting their figures.

As you can see in the comparison photo of Princess Leia, the cards for the Black Series maintain the feel of the Kenner releases but update to accommodate the large bubble, peg hole, and 40th Anniversary logo. The card backs are a heavy cardboard and should display well.  Overall, the cards are nicely done and while not in the traditional 3.75″ scale, the 40th Anniversary line makes for a fun collection to celebrate.