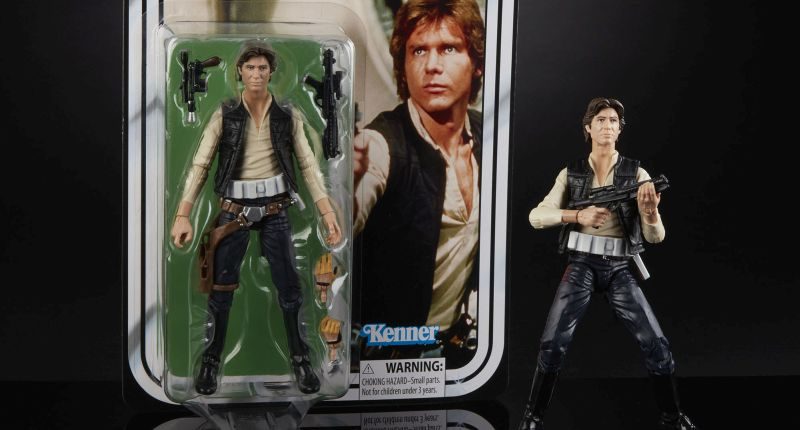 Hasbro just wrapped up their Toy Fair presentation where they laid out plans for the upcoming releases of Transformers, My Little Pony, and Star Wars. Several items shown off were previewed by Yahoo Movies earlier in the week but details about the 40th Anniversary celebration were give.

Hasbro will celebrate the 40th Anniversary throughout the year with their new Titanium figure line and a special line of 6″ Black Series figures. Force Friday II will be coming on September 1st but no The Last Jedi toys were shown today.

Hasbro will new 6″ Black Series figures coming this year from the full Star Wars Saga, including Lando Calrissian from The Empire Strikes Back and an Emperor’s Royal Guard from Return of the Jedi.  Luke Skywalker from The Force Awakens is also on tap.

For the 40th Anniversary, Hasbro is releasing a set of figures on vintage Kenner inspired cards. The set recreates the first 12 figures released by Kenner. A 13th figure, Luke Skywalker X-Wing Pilot, will be a Celebration Orlando exclusive.

Princess Leia will have a new face sculpt from the version released at retail in the main line. The Jawa will have sculpted robes rather than soft goods. Finally, the Death Star Trooper will have a removable helmet but be cast in a black uniform and not gray like the vintage Kenner figure.

Darth Vader will also be released carded but will be included in a $39.99 Legacy Pack which will include a display stand and cardboard backdrop for showing off your figure collection.

The Black Series Centerpiece statues will have pegs for additional Black Series figures such as the Snowtrooper and AT-AT Driver on the Luke Snowspeeder piece.

Several stores will have 6″ Black Series exclusives coming this year.