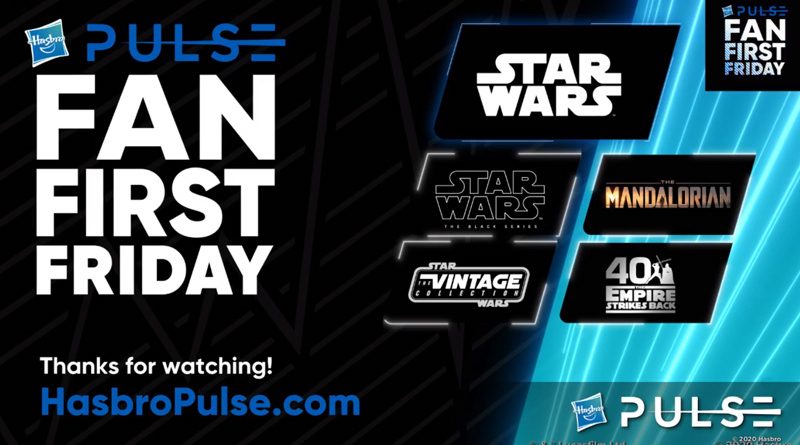 Hasbro Pulse hosted a live stream on their Facebook page today and they had several new announcements for the Black Series and The Vintage Collection along with some Q&A at the end. Some of the items announced will be available for pre-order starting at 1:30 today.

Luke Skywalker from the 2-pack will have interchangeable hands and the handstand in the photo was accomplished without any support. Yoda is a new sculpt and also comes with two portraits.

The 4-LOM and Zuckuss 2-pack will be available on Amazon. They have the classic Kenner deco in the same vein as the San Diego Comic-Con exclusive Boba Fett. As another nod to the Kenner release, the names will be swapped on the cards.

Han Solo in Carbonite will also be carded as part of the 40th anniversary of The Empire Strikes Back and will include a stand so he can be displayed standing up or hovering for transport. Han will be available on Amazon.

The Boba Fett Prototype helmet is a little different than the current release as it doesn’t have the dent in the helmet. And, of course, the color is different. This will be a Hasbro Pulse and Fan Channel exclusive so look for it on sites such as BigBadToyStore and Entertainment Earth.

There won’t be a Black Series Archive release this year but will be back in 2021. Hasbro will be running a Fans’ Choice poll for what figures to release next year. It will start on Fan Media websites with the final vote taking place on the Hasbro Pulse website starting on May 15th.

Gaming Greats announcements will come on Monday, May 4th, from GameStop.

Luke is a re-pack from the San Diego Comic-Con 3-pack that was released last year.

They also showed off a new The Mandalorian branded Monopoly game.

Several items they showed during the lives tream, such as the Black Series, animatronic, and plus The Child have all been available for pre-order and will be shipping soon. On Monday, May 4th, GameStop will have new announcements for the Gaming Greats Black Series line.

Patrick and Eric answered some questions at the end that were submitted online (Instagram, maybe other locations). There is a plan to offer a more regular Q&A online via the Hasbro Pulse website.

Hasbro recommitted to moving forward with more 3.75″ figures in future years and Clone Wars characters are candidates. No plans for new comic 2-packs.

Hasbro were asked if the various lines of toys spread them too thin and they said it didn’t. Lines mentioned, Galaxy of Adventures, Battle Bobblers, and others, are done for fans besides the collector driven Black Series and Vintage Collection. They try new things for all parts of fandom.

When asked if HasLab could be used for smaller projects such as individual figures, Eric mentioned that HasLab was for “dream” items which could include figures.

Asked about an Archive line for the 3.75″ scale, Patrick mentioned that they already do that by bringing back previously released figures such as the recent release of the Bespin Han and Luke and General Lando. He also noted that these are supposed to be for outlets such as Fan Channel websites and that the recent release of this wave, specifically, to retail was a mistake and shouldn’t have happened.

There was no commitment when asked about diorama sets in the Black Series. An example in the question was Yoda’s hut.

The last couple of questions were about Patrick and Eric’s collecting and working highlights. That wrapped up the live stream.