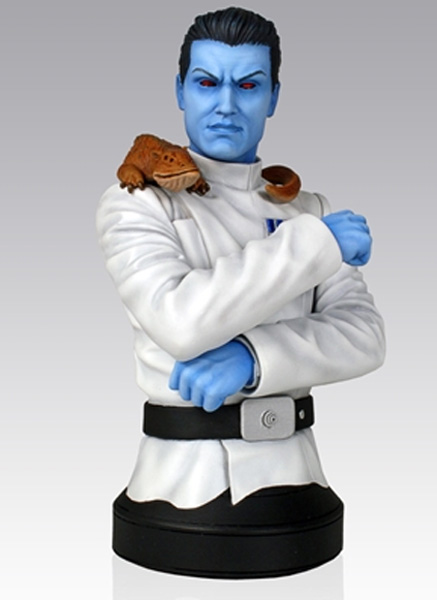 Grand Admiral Thrawn was first shown off in a report over on RebelScum.com back in March and with this pre-order, we now know that we can expect him towards the end of the year.  Priced at $75, the Admiral is in his dress whites and includes an Ysalamir which he uses as a defense against the Jedi in Timothy Zahn’s classic series that’s become known as the Thrawn Trilogy.

Gentle Giant had already declared 2013 as The Year of the Bounty Hunter for their Jumbo line of 12-inch, Kenner inspired retro figures with the release of the Rocket Firing version of Boba Fett and pre-orders for IG-88 and Bossk.  Now we have two more to to fill out the ranks.

In what’s sure to generate a variant at some point, Gentle Giant has gone ahead and corrected a 33 year old mistake and is offering the second droid bounty hunter with his correct name, 4-LOM.  The 12-inch action figure is priced at $80 and, like the Admiral and the other releases, is slated for a 4th quarter release.

Also priced at $80, Dengar will come with The Empire Strikes Back card which will have 45 back artwork.

None of these offerings are exclusive to Gentle Giant so be on the lookout for cheaper prices from your favorite online dealers.

The final two offerings from Gentle Giant include two deluxe mini bust releases of Luke Skywalker in his Snowspeeder Pilot outfit.  The reason we called this redundant is that one version is a Premier Guild exclusive and will include three sets of arms so he can be posed holding a lightsaber, grappling hook launcher or a blaster.  The second release, NOT an exclusive, will have two arms, one with a blaster and the second with the grappling hook launcher.

After the colossal screwup with the General Veers mini busts in 2012, we can’t help but think this is just a total disaster waiting to happen.  The busts don’t even have different price points, they’re both ringing in at $85 and because the only artwork available is computer generated, and not Lucasfilm Licensing approved as of this writing,  there’s absolutely no way of knowing which version should be ordered.  There’s nothing to really differentiate them from each other.

Trust in Gentle Giant, that they’ll actually deliver what they’re advertising, is at an all-time low for many collectors.  We can only wish our fellow collectors good luck if they take a shot at either of these releases.

It’s a shame that Gentle Giant will waste tooling budget on these two versions of the Luke mini bust when they still haven’t delivered the 1:6 scale R2-D2 statue they first showed off in 2005.