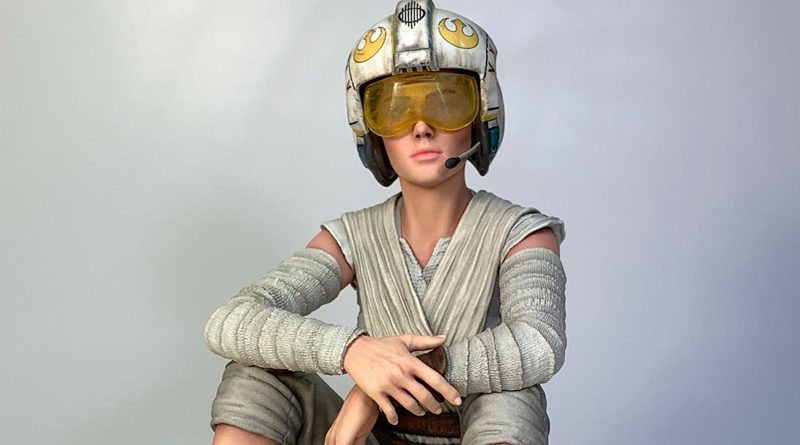 Gentle Giant has posted a pre-order for their new Dreamer Rey statue. The inaugural statue for the new Star Wars Premier Collection is available as a regular edition, limited to 3,000 pieces, for $150. There is also an exclusive edition for Premier Guild members that includes interchangeable head sculpts, one of which is Rey wearing her X-Wing helmet from Star Wars: The Force Awakens.

Premier Guild members will need to be logged into their account to place an order for the exclusive. Photos and press release below.

Earlier this year, Gentle Giant Ltd. showed off their first entry in the Star Wars Premier Collection line of statues, Dreamer Rey. Depicting Rey sitting on the sands of Jakku, gazing up at the stars, pondering her origins and dreaming of escape, the statue was shown with both helmeted and unhelmeted heads. Now, GG Ltd. is excited to announce that the helmeted head will be the next Premier Guild exclusive!

Pre-orders are now open on GentleGiantLtd.com for both versions, although only signed-in Premier Guild members will be able to view and order the exclusive version. If you are not a Premier Guild member, it’s not too late to sign up, order Dreamer Rey and, if you’re a Gold or Platinum member, choose your free gift!