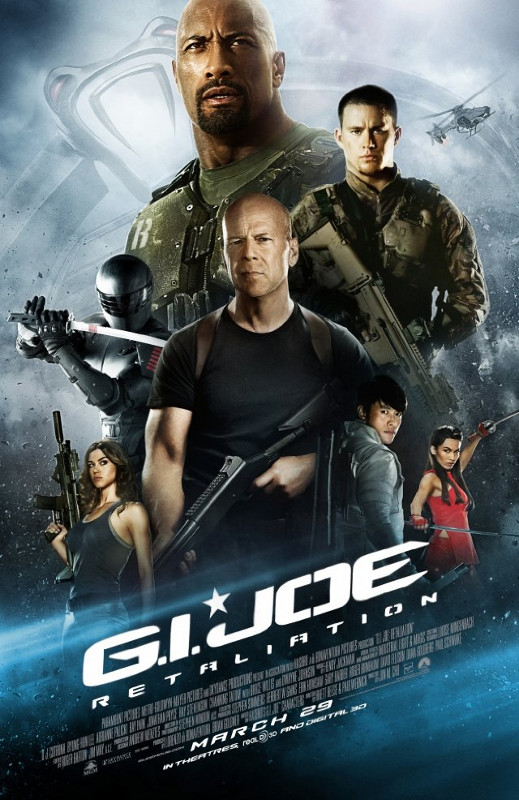 Even though I didn’t completely trash G.I. Joe: The Rise of Cobra (ROC) when it opened in 2009, it is definitely not one of my favorite movies and I’ve actually come to like it less over time.  Knowing that, I wasn’t sure how much I would enjoy G.I. Joe: Retaliation when it was first announced.  With the hype behind it ramping up in early 2012, I was starting to get a little excited and then the plug was pulled; the film was being delayed until 2013 in order to convert it to 3D.

The speculation as to whether or not there were other reasons behind the postponement ranged from re-shoots to script updates to a complete overhaul.  There were definitely a lot of photos and clips in the trailers that were not in the final cut of the movie, but unless we see a director’s cut or find out in some other way where those scenes went, we don’t have much context for them and don’t know if they were standard cuts or things that were hacked out in an attempt to cut a better movie.  In the end it’s probably not even relevant.  What is relevant is that the movie is finally opening this week with early preview showings last night.  Even though the annual G.I. Joe convention will be held next week in Indianapolis, and I’ll be seeing the film with a gang of like-minded fans, I decided to go to the early opening rather than wait.

G.I. Joe: Retaliation is a true sequel to The Rise of Cobra, the opening sequence calls back to the first film, mentioning the nanomite war, before setting up the current status of the G.I. Joe team and introducing us to the main players.  The only returning characters on the Joe team are Duke (Channing Tatum) and Snake Eyes (Ray Park).  Byung-hun Lee reprises his role as Storm Shadow, Arnold Vosloo has a cameo as Zartan and Jonathan Pryce is back as the president.

Joining the Joe team for this outing are Dwayne “The Rock” Johnson as Roadblock, D.J. Cotrona as Flint and Adrianne Palicki as Lady Jaye.  Joseph Mazzello appears as a new character called Mouse and the RZA and Elodie Yung bolster the ninja ranks as the Blind Master and Jinx respectively.  Ray Stevenson comes aboard as fan favorite Firefly and Luke Bracey takes over the hood from Joseph Gordon-Levitt to portray Cobra Commander.

Jon M. Chu, whose main background in directing is related to dance (Step Up 2: The Streets, Step Up 3D and The LXD: The Legion of Extraordinary Dancers), seemed like an odd choice at first but being able to incorporate choreographed action into a story, whether it’s dance or fighting, is actually right in his wheelhouse.  Retaliation certainly has plenty of action, much of which unfolds well on screen but does, in a few places, fall victim to tight shots with quick cuts.

The basic story of the movie revolves around Cobra taking over the world, in this case, by nuclear disarmament of the world powers while secretly launching their own mega weapon.  Unlike ROC, however, this movie feels more grounded and “real.”

The writing in Retaliation has less camp than the previous outing and the cast step up and treat it seriously which helps sell the less than believable aspects.  Jonathan Pryce owns his role as both the kidnapped president and Zartan in disguise, playing both roles with appropriate amounts of serious and sociopath.  Both Elodie Yung and Adrianne Palicki have strong roles and hold their own in the film, which the actresses, writers and director should all be commended for; they could have easily been lost to the background with Tatum, The Rock and Bruce Willis fronting the Joe team.  Park and Lee both have incredible fight sequences with most being brilliant to watch and the showdown between The Rock’s Roadblock and Stevenson’s Firefly didn’t disappoint!

Most of the movie had decent pacing with the plot moving along well, but one of my major gripes was when the movie cut to Tokyo to introduce Jinx and the Blind Master.  The sequence felt forced into the movie as if it didn’t belong where it did or something had been changed with it making its inclusion jarring.  The exposition by the Blind Master, basically introducing the scene, didn’t help smooth the bumps very well.  However, it was necessary to set up the subplot surrounding Storm Shadow’s story and place in the film.

The film’s running time, officially 1:39, was kind of on the short side and could have benefited from another 15 minutes or so.  They could have used that to better present a couple of the fight sequences as well as adjust the flow of the movie.  The 3D in Retaliation was mostly well done, I didn’t feel that there were a lot of “look at me, I’m 3D” gimmicks thrown in, but there were a few.  The depth added by the conversion helped some scenes, Snake and Jinx in the mountains and the shots from space for example, but also blurred some of the action and didn’t really help, or wasn’t necessary, for a lot of the film since it was shot on location or on practical sets.  I’m no cheerleader for 3D but I didn’t mind it so, mission accomplished?

G.I. Joe: Retaliation had an interesting story and, at times, flirted with being the movie that most hard core fans wanted.  The few flaws, however, may have let it come up a little short.  I think fans of action movies, who aren’t invested in the characters in this film, will enjoy it quite a bit and I’m crossing my fingers for that outcome, since I feel the actors and Jon M. Chu deserve a sequel based on what they’ve accomplished with this movie.  In my eyes, it redeems the franchise.

G.I. Joe: Retaliation has its flaws and its moments of brilliance.  The acting is solid all around, the action, which is nearly nonstop, benefits from being grounded in reality and the story was fine even if the plotting was a little off.  I’ll offer up a generous 4 wheels of cheddar out of 5.