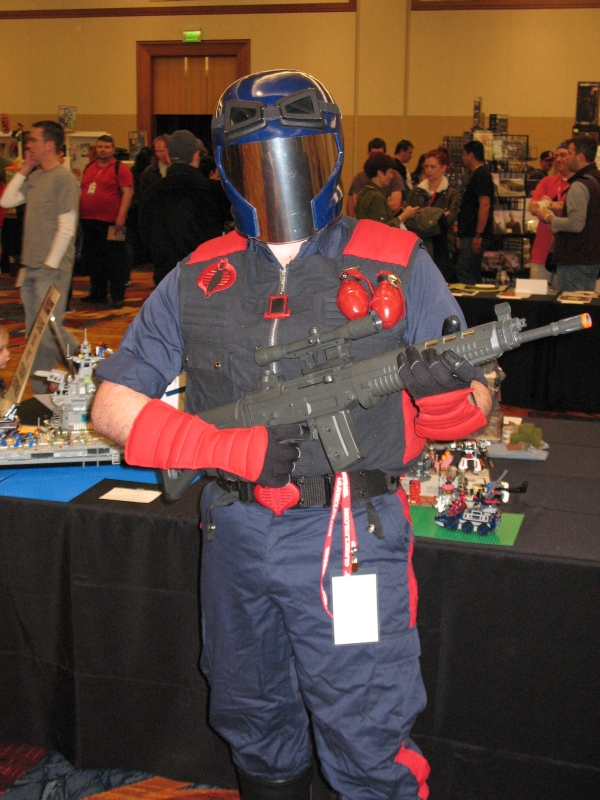 This past weekend I attended my second G.I. Joe Convention, held this year in Indianapolis, IN.  While the Convention has several standard events each year, one of the big draws was the release, the previous weekend, of G.I. Joe: Retaliation, which we saw on Friday night.  For fans of the Real American Hero era of the toys and entertainment, the guests were a big draw with appearances by Larry Hamma, Kirk Bozigian and two voice actors from the classic cartoon, Mary McDonald-Lewis (Lady Jaye) and Bill Ratner (Flint).

The Convention kicked off with tours around the Indianapolis area on Wednesday and Thursday and opened Friday with the parachute drop which featured a new Hasbro KREON figure of Hit & Run.  The show opened for registered package holders on Friday afternoon where we had our first look at the sales floor and, outside of early package registration on Thursday, a shot at the Convention souvenirs.

This year, most of the souvenirs sold out early on Friday or even Thursday night, in the case of the carded Lady Jaye figure.  The selection was decent, with both 1:18 and 1:6 scales represented along with the introduction of a set of KRE-O figures that paralleled the Nocturnal Fire boxed set.

The majority of the sellers on the floor were showing vintage and modern 1:18 scale toys and accessories but there were a few booths catering, mostly, to the vintage 1:6 line.  At least one booth was sporting some modern offerings from companies such as 21st Century Toys, Dragon and DID, but 1:6 was definitely in the minority.

Some of the larger booths on the floor had a deep selection of vintage ARAH toys including both carded and loose figures and vehicles along with a decent selection of parts and accessories.  If you couldn’t find a complete figure for a price you were willing to pay, it’s possible you could piece one together with a little patience and searching.  Prices ranged from $3 for loose, incomplete figures all the way to about $2,500 for a Defiant Launch Complex with sealed contents.

Surprisingly, several booths had selections of foreign releases including several Brazilian figures, carded and loose Funskool figures and even Action Force from the UK.  The Brazilian and UK releases have been gaining popularity over the last few years and it was fun to see them represented.

The G.I. Joe Club had a large roster of panels over the weekend and I stopped in for three of them, all on Saturday.  Besides the Club’s own round table, I also went to The History of Palitoy Action Force, presented by David Tree, and Hasbro 2013 Product Line Presentation which was hosted by Derryl DePriest and John Warden.  I already covered the Hasbro and Club panels but didn’t take a lot of notes during the Palitoy panel.  However, the photos and, especially, the vintage commercials presented during the panel were all excellent.  David Tree is the go-to guy for everything Palitoy and he knows his stuff.  If you ever have an opportunity to see him present info on the Palitoy line, or read the articles he’s posted on the topic, take it.

This was the first time that I’d attended the dinner and casino night, and the auction that followed.  Overall, it was an excellent time.  The dinner was top notch and the company made for great conversation.

I wasn’t quite prepared for the casino and auction part of the deal.  I had fun playing Blackjack but wasn’t aggressive enough to really be a contender during the auction.  There were a lot of cool items available but didn’t come home with anything.  All was not lost, however, as the money I spent on extra credits did go to the charity, Cook Children’s Hospital in Fort Worth, TX.

The costume contest and prizes for the custom figures and dioramas were handed out just prior to the auction and it’s always awesome to see the creativity that the fans put into their hobby.  Unlike a Star Wars or comic convention, costuming doesn’t seem to be as big a part of G.I. Joe Con but the quality on the few costumes was up to the standards of any other show.

I traveled to the convention with a fellow PSWCS member, Chris, and met up with another, Shawn, at the show.  Meeting Justin Bell from GeneralsJoes.com and Paul from The Robot’s Pajamas were highlights for me as it’s always fun to put faces to the names we interact with online.  Besides, driving all the way to Indianapolis goes a lot faster when you’re not locked in a car by yourself for 12 hours.

Overall, the Convention was a blast.  There were rare items to see, new information to absorb, collectibles to buy and beer to be drunk.  The Panels were interesting and I felt the organization was pretty solid.

There were a few minutes during the entrance to the movie on Friday night that we questioned the organization but since that was probably the first time the Club attempted that, I’m not going to hammer them.

While there was plenty to see and do, I don’t think I’d fly to attend another Joe Convention.  If and when the show is within driving distance in the future, however, count me in!