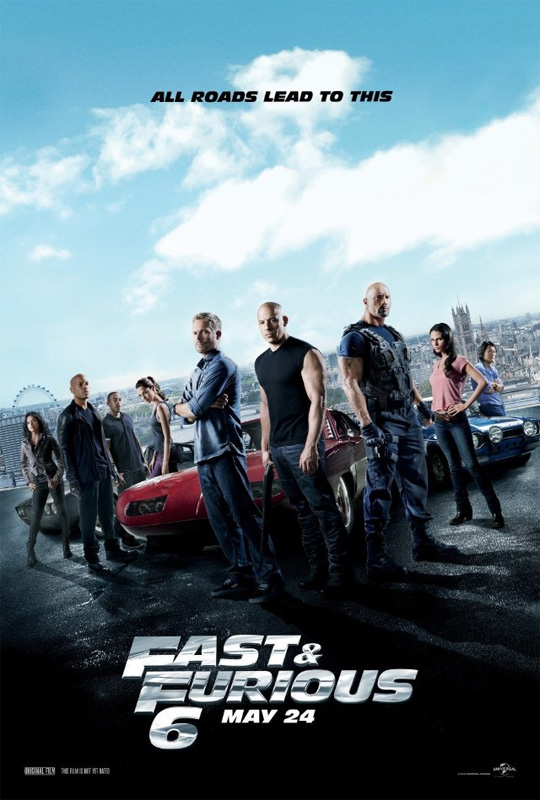 If you told me in 2001, as I was sitting in the theater watching The Fast and the Furious, that I would be sitting in another theater 12 years later watching the sixth installment of the “franchise” I would have called bullshit.

If you had also told me that the sixth film in the series would do a better job of tying up all the loose ends created by the first four (sometimes disparate) movies than a series such as Star Wars, I probably would have given you a verbal smack down.

Tonight, not only was I sitting in a theater watching what’s become one of my favorite movie series, I also witnessed it come full circle, returning, at times, to the heart of the story that I loved so much the first time; family.

Family was once again a major theme in Furious 6 and it was better for it because, let’s be honest upfront, the action sequences towards the end were so over the top that it nearly ruined an otherwise fun movie for me.

With two exceptions, the cast of Fast 5 was back; Paul Walker, Vin Diesel, The Rock, Jordana Brewster, Tyrese Gibson, Ludacris, Sung Kang, Gal Gadot and Elsa Pataky.  Gina Carano joined the movie as Hobbs’ (The Rock) partner, Luke Evans took a spin as the villain, Shaw, and Michelle Rodriguez was back as Letty, a plot point spoiled in the trailers so I don’t feel bad mentioning it.

Letty wasn’t the only familiar face from the past to return, but I’m going to hold onto a couple of those mentions because you should find them for yourselves.  Let’s just say that between a well-done montage of the previous five films, during the opening credits, a couple of flashback sequences and those cameos, Furious 6 added a certain cohesiveness to the franchise that’s quite often missing in a series of this type.

Furious 6 takes place about a year after Fast 5 and the main story is that Hobbs, in an attempt to capture the outlaw Shaw, calls on Dom and his team for an assist.  The payoff for the help; full pardons all around and the chance to reconnect with Letty.

Unlike some of the previous films, there was no heist for our favorite team of outlaws to plan, instead they were playing the role of the police and the overall plot may have suffered a little for it.  Making up for it were several hilarious moments, usually at the expense of Gibson’s Roman, and plenty of car action.  The other highlights, for me, were the two scenes where Carano’s Riley went at it with Letty.  Although the choreography was decent for those two fights, the quick-cut edits kept them from rising to the level of Carano’s turn in last year’s Haywire.

The two biggest problems for me were the last two big action pieces towards the end of the movie.  The first, on a freeway in Spain, included a tank and one of the most ridiculous rescue stunts I’ve ever seen outside of a superhero movie.  Topping it, however, was the plane chase…who knew they built 30 mile long runways on military bases.  Uh, that’s all I can say about that.

Putting Dom’s team on the side of the law for Furious 6 was an interesting spin and I thought that it generally worked, even if I did miss them not being in on a heist.  Putting the family aspect back at the heart of the film restored one of the strengths of The Fast and the Furious and helped ground the movie, which it needed with all of the action surrounding it.

There’s a pretty big twist in the movie that caught me off guard and we are also treated to a bonus scene, during the credits, that sets up the already announced Fast & Furious 7.  The only hint I’ll give you is that it will transport you to a wider world.  Don’t cheat and look it up on IMDB.

The Fast & Furious franchise is not Shakespeare and it’s not going to win an Oscar, but it’s flat out fun to watch.  Plus, Gina Carano, amirite!  The car chases and several of the fight sequences were well done, plenty of humor, at times the movie got back to its roots and the ending was both (mostly) satisfying and exciting.  I have to knock off some points for that plane chase though, no way around it.  I would have also liked to have seen a couple of the fights play out more fluidly, you’ve got the Rock and Gina Carano for shit’s sake, that’s what they do.  I was happy to see Vin Diesel return to the Dominic Toretto that launched the series and made the character so interesting a decade ago.  Having Michelle Rodriguez back to play opposite him added the perfect topping.

Had the action sequences been a little less fanciful, Fast & Furious 6 could have easily gained a full point on my rating scale, still, three wheels of cheddar out of five.  If you like this franchise, or just want some fun without thinking too hard, you’ll enjoy it.