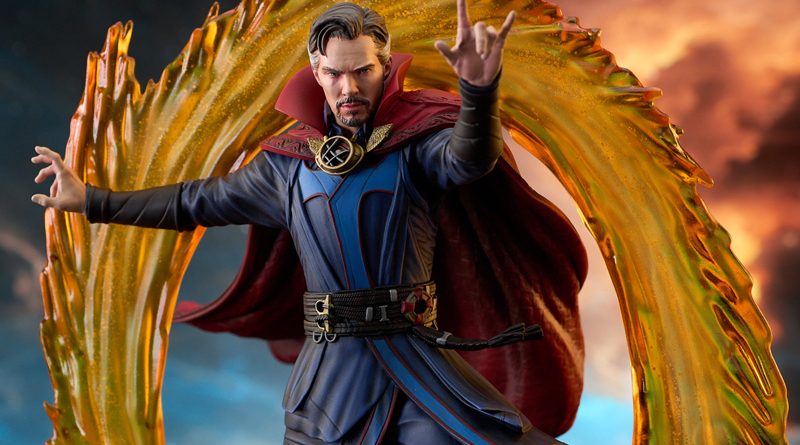 You may be dreaming of spring, but we’re dreaming of the fall! That’s when our new batch of pre-orders will ship to customers, and what a batch it is! A variety of Marvel and Star Wars items are in the offering, as well as items from Uncharted, Power Rangers and Nightmare Before Christmas! Plus, we return to the Pacific Rim! It’s the best of all worlds! Read on for details, then pre-order at diamondselecttoys.com and gentlegiantltd.com!

A Gentle Giant Ltd. release! You can’t run from your past, but the Winter Soldier is gonna try, in this all-new animated-style statue based on the artwork of Skottie Young! Bucky Barnes sprints off one of Marvel’s popular Young Marvel variant covers and into your collection as an approximately 4-inch resin statue atop a black pedestal base. It features art-accurate paint applications and is limited to only 3000 pieces. It comes packaged in a full-color box. Sculpted by Casen Barnard! SRP: $49.99

A Diamond Select Toys release! Get ready for the thunder! The alien wielder of Stormbreaker, Beta Ray Bill, leaps off the comic page and onto your shelf as the newest Marvel Gallery Diorama! Leaping through the clouds, Bill is ready for battle, hammer in hand, with detailed sculpting and paint applications. This piece stands approximately 10 inches tall and comes packaged in a full-color window box. Designed and sculpted by Alterton! SRP: $49.99

A Diamond Select Toys release! Prepare to enter the Multiverse! Doctor Stephen Strange steps through a mystical portal in this all-new Gallery Diorama, inspired by the next entry in the Marvel Cinematic Universe! With orange energy whirling around him, cape flapping in the wind, the Sorcerer Supreme stands approximately 10 inches tall and features detailed sculpting and paint applications. It comes packaged in a full-color window box. Sculpted by Gentle Giant Studios! SRP: $49.99

A Diamond Select Toys release! Behold… The Vision! Debuting in 1968, the synthezoid Avenger known as the Vision has since become one of the team’s most stalwart members, despite being the creation of the evil Ultron. Now, the Vision joins his teammates in the Marvel Select line, with an all-new 7-inch action figure! Featuring interchangeable parts and effects, this figure features approximately 16 points of articulation and comes packaged in the famous Select blister card packaging with side-panel artwork. Designed by Eamon O’Donoghue, sculpted by May Thamtarana! SRP: $29.99

A Diamond Select Toys release! He wants to eat your brains! Back by popular demand, it’s what many have called the greatest Venom action figure ever made! This 7-inch scale action figure of symbiotic Spider-man foe Venom features 16 points of articulation and almost a dozen interchangeable parts, including hands, heads, and a back attachment, so you can re-create his classic, modern and “Madness” appearances! Packaged in the display-ready Select packaging, with side panel artwork for easy shelf reference. Don’t miss out on this sought-after figure! Sculpted by Jean St. Jean! SRP: $29.99

A Diamond Select Toys release! It’s Morphin’ time! Two of the most powerful Zords around, the Megazord and the Dragonzord, are now 4-inch Vinimates vinyl figures for your Power Rangers collection! With poseable heads and arms and a removable sword for the Megazord, these are awesome stand-alone pieces, not to mention the perfect companions to your Power Rangers Minimates! Both come packaged together in a full-color window box. Designed by Barry Bradfield! SRP: $24.99

A Diamond Select Toys release! Get ready for the adventure of a lifetime! Video game hero Nathan Drake has made it to the big screen with the Uncharted movie, and now the treasure hunter is a deluxe action figure from DST! Featuring 16 points of articulation, movie likeness and a variety of interchangeable parts and accessories, this figure stands approximately 7 inches tall and comes packaged in a full-color window box. Designed by Yuri Timg, sculpted by Gentle Giant Studios! SRP: $24.99

A Diamond Select Release! Time to return to Pacific Rim! In Pacific Rim Uprising, a new generation of Jaeger mechs joined the fight against the kaiju menace, and now the action figures are becoming available once again! Gipsy Avenger, Saber Athena, Bracer Phoenix, Obsidian Fury, Titan Redeemer, Guardian Bravo, Valor Omega, November Ajax and the Jaeger Drone make up the army of Jaegers, and each giant robot is cooler than the last! Figures range from 6.5 inches to 8.5 inches tall with realistic mechanical details, and each features approximately 16 points of articulation! Each comes packaged in a full-color window box. Sculpted by BigShot ToyWorks! SRP: $29.99/ea.