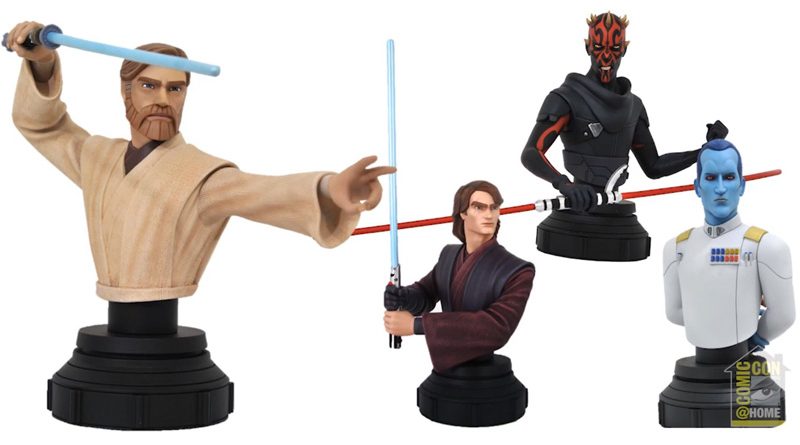 Zach Oat from Diamond Select just hosted the Comic-Con@Home panel for Diamond Select and Gentle Giant. The video is linked below where they went over upcoming releases from Marvel, DC, Nightmare Before Christmas, Mortal Kombat, and more.

The Gentle Giant portion of the video gave us looks at some upcoming products that were previously announced, including some that are already available for pre-order.

The 1:6 scale bust line will have Sabine Wren join the Rebels crew this Winter. The Mandalorian and 0-0-0 are also on the way with later this year or early 2021. Also for 2021, one of the Premier Guild gifts will be Tessek which one the fan vote.

The Legends in 3D line will expand with a TIE Pilot and First Order Stormtrooper, Darth Maul, and The Mandalorian. Darth Vader has already been announced and is available for pre-order, and Kylo Ren was previously released.

The Mandalorian is represented in two Premier Collection statues with version one of his armor coming this summer and version two in the fall.

Ahsoka is coming in a 1:7 scale statue and coming soon will be the Star Wars: The Empire Strikes Back Milestone Darth Vader statue.

All of the photos were pulled from the video, linked below.