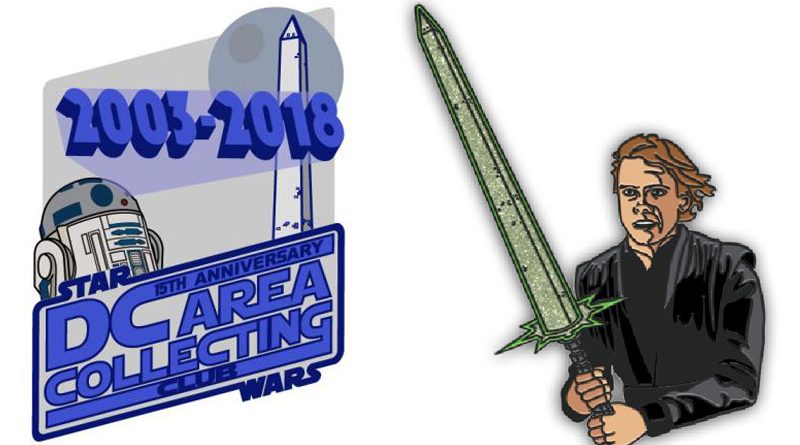 The Washington DC Metro Area Star Wars Collecting Club (DCSWCC) wishes to announce their eighth biannual charity lapel pin. The 2018 pin features Luke in his black Jedi garb holding a glimmering green lightsaber in the shape of the club’s signature Washington Monument. Eighth in the series of high-quality pins, and officially licensed by Lucasfilm Ltd., each pin is individually stamped and numbered – only 500 will ever be made!

All proceeds benefit the Tragedy Assistance Program for Survivors (www.taps.org). TAPS offers compassionate care to all those grieving the death of a loved one who served in the United States Armed Forces. Since 1994, TAPS has provided comfort and hope 24 hours a day, seven days a week through a national peer support network and connection to grief resources, all at no cost to surviving families and loved ones. This is a most fitting charity tribute for DCSWCC, because in February the club lost a beloved friend, long-time club officer and treasurer, Luke Jedi focus collector, and retired U.S. Navy Lieutenant Bob Martinazzi.

DCSWCC has a rich history of supporting children’s charities in the Washington DC region. Their other charity pins featured Yoda, Chewbacca, the animated Boba Fett, Luke on his tauntaun, R2-D2, Commander Cody, and BB-8, and have raised over $34,000 for organizations including Children’s National Medical Center, The Children’s Inn at NIH, and Believe in Tomorrow Children’s Foundation.

DCSWCC is one of the oldest, largest, and most active collecting clubs in America, with about 50 members. The club meets monthly and holds special events throughout the year such as socials, picnics, and “Roadshow” appraisal events. For more information, visit the club website at http://www.dcswcc.club