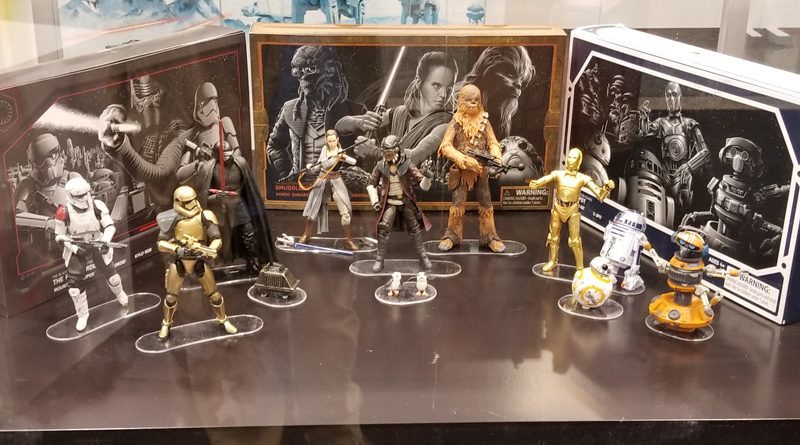 Hasbro was back at Celebration this year with the announcement of several new items and a pair of exclusives. Celebrating the 20th anniversary of the release of Star Wars: The Phantom Menace were two carded Black Series figures, Darth Maul and Obi-Wan Kenobi. They’re on scaled up recreations of the 1999 card backs.

While other toys in the cases were shown at Toy Fair, this was the first public look at several figures including Chopper and Ezra, Dr. Aphra and her droids, and the new Luke Skywalker in Stormtrooper disguise, now with wet hair.

Announced at Toy Fair as part of the Black Series line is the new Hyperreal Darth Vader. Although in the Black Series line, the figure is 8″ scale and comes with a soft goods costume over a metal armature to maintain articulation. Vader will have interchangeable hands and his iconic lightsaber.

Finally, newly announced is a new Luke Skywalker Battle Simulation Helmet which will retail for $99.99. The helmet includes 3 speakers, lights, and sound effects which can be switched between the Battle of Hoth and Battle of Yavin scenes from the movies.

Hasbro’s new Retro line was also on display for the first time. The recreations of the vintage Kenner figures look incredible and come on nicely recreated card backs. Each card will have a “Retro” sticker (formerly announced as printed) and faux aging marks. The line consists of single carded versions of Luke, Leia, Han, Chewbacca, Darth Vader, and a Stormtrooper. A carded Grand Moff Tarkin is also part of the line but will come packed in with a recreated Escape From Death Star game. The line is currently a Target exclusive. We asked a Hasbro rep if it could expand and as with most future plans, it’s a wait-and-see how it does before more will be decided on.

Most of what was shown in The Vintage Collection are repacks of previously released figures, only now they feature the new face printing technology. Upcoming new releases include Lando Calrissian from Solo, and Luke Skywalker from Crait at the end of Star Wars: The Last Jedi. We also got a look at the Death Star Gunner and Tank Gunner.

Going along with the new Jabba’s Sail Barge that was just released in early March were the new Skiff Guard 3-pack, Jabba’s Palace, and Skiff. Jabba’s Palace will be a Walmart exclusive and includes carded versions of Han Solo with Carbonite and Ree Yees.

A big surprise for the weekend was the announcement of three Black Series 4-pack which will be exclusive to Disney Parks in the new Galaxy’s Edge attraction opening later this year. While they’re considered 4-packs, each includes a smaller offering that’s counted.

Hondo Ohnaka, Rey (Batuu), Chewbacca, and Porgs make up the first set while Kylo Ren, Commander Pyre, Mountain Trooper, and MSE Droid come in the second. The third pack is a droid set with R2-D2, C-3PO, BB-8, and a newly named DJ Rex.

Finally are new exclusives. First up is an Amazon exclusive Emperor with throne from Star Wars: Return of the Jedi. He comes with interchangeable hands with and without force lightning and three different heads with different expressions. It’s hard to see in the photos but the throne cushions do appear to have a purple-ish color to them which would be accurate to the prop.

The final three exclusives are all coming to San Diego Comic-Con this year. From the Black Series line is a carded Boba Fett, a Vintage Collection 3-pack titled Luke Skywalker Jedi Destiny which has Luke in Stormtrooper armor, X-Wing outfit, and Jedi Knight robes.

Lastly we’ll see a Retro Darth Vader Prototype Edition. The figures are made up of “prototype” colored parts. When we spoke to Hasbro about them I believe they said that there are six different colors that can make up a figure. There are some guidelines that no figure should have more than two of the same color limbs and the head should never be the same color as the torso. There are also different color lightsabers and they won’t match the color of the arm.

All three will be available at SDCC but as with past exclusives, a limited number should be available on Hasbro Pulse after the convention.